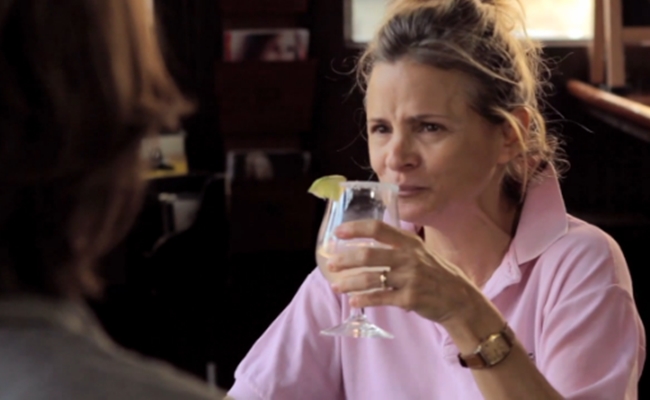 Humorist, comedienne, and general funny person Amy Sedaris is the latest actress to take a stab at web video. The Strangers With Candy star has delivered a memorable turn in a guest appearance on F to 7th, a lesbian-centered web series from creator Ingrid Jungermann.

Sedaris’ appearance comes in the series’ fourth episode, with four more coming to complete a full season. She appears as Kate, the aunt of Jungermann’s eponymous protagonist. As the pair share a meal, Kate launches a series of inapt remarks regarding lesbianism, PDA, and her own sex life. She’s a caricature of the inappropriate way in which many people approach discussions of the LGBT lifestyle, reaching this parody by way of the boozy aunt who has had one too many drinks. If you need an example of such a person, just pay extra close attention at your next Thanksgiving.

Jungermann, to her credit, does well to keep up with the quick-witted comedy vet. With a sad face and a detached, almost bored voice, she plays a good straight woman to Sedaris’ oblivious and over-the-top funnywoman. The pair have a great comedic timing, allowing the episode to pop off the screen. It’s three and a half minute runtime seems to fly by.

F to 7th, which is available on its website and through Vimeo, chronicles Jungermann’s struggles as a middle-aged lesbian. She previous created The Slope, which also featured some snappy writing. By pairing her dialogue with a pitch-perfect guest star, Jungermann has found a winning formula.