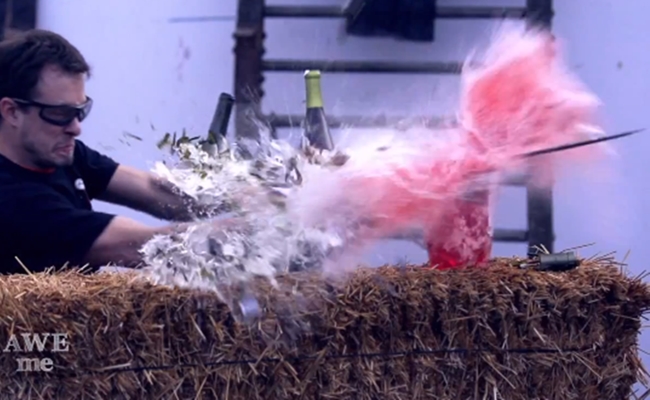 Game of Thrones fans (myself included) still have to wait another interminable month and a half before we can return to the land of Westeros. Luckily, a new web series produced by the Thrones TV show and distributed by Break Media provides a nice treat to hold us over. The brand new AWEme channel is hope to Man At Arms, where a “blacksmith to the stars” forges fictional weapons.

Said smith is Tony Swatton, who coordinated props for movies such as Pirates of the Caribbean and The Last Samurai. The show operates on the same principle as Ben Baller’s Insane Bling and Detroit Rubber, namely the fact that when you observe a master of an unusual domain, it tends to make pretty good reality TV. Here, it’s fun to watch Swatton traipse around his workshop, which is filled with a million scary-looking power tools. Oh, and the final product, Jamie Lannister’s sword from Game of Thrones, looks pretty damn cool.

To keep things sufficiently Internet, Man At Arms employs plenty of dubstep and slow motion sword demos. We get to see Swatton and his friends carve up a variety of items with the finished blade because, hey, why not? If it worked for this guy, it can work for anyone.

AWEme is a new educational channel from Break; the distributor has achieved YouTube hits with its own channel as well as Screen Junkies, and if Man At Arms can continue to impress us with shiny sharp things, AWEme will be off to the races as well.