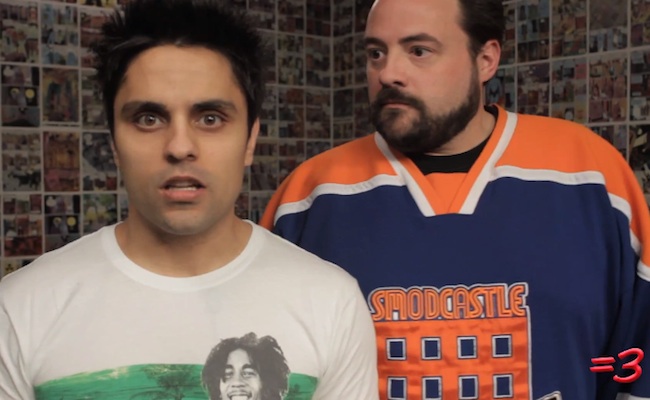 Kevin Smith recently signed with Maker Studios. Ray William Johnson is on less than pleasant terms with Maker Studios. But their respective relationships with one of the largest multi-channel networks on YouTube didn’t stop the man who voices Silent Bob from stopping in on the set of the top show on only the second YouTube channel to amass 7 million subscribers and perform the duties of guest host.

Johnson welcomed Smith to the latest installment of his viral video review program =3, where Smith proceeded to play a semi-exaggerated version of himself. That is, Smith portrayed a self-deprecating guy with a few extra pounds, an affinity for marijuana and self gratification, and a genuine sense of modesty despite having a very successful film career, all while wearing his characteristic Smodcastle hockey jersey and shouting out to his own YouTube channel SeeSMod. Check it out:

This is the second stellar collaboration RayWJ has orchestrated in as many weeks. Johnson invited Ian Hecox and Anthony Padilla of Smosh onto his program earlier in January, and the three proceeded to enact spot-on parodies of one another.

And with these two recent collabs in mind, it seems as if Johnson’s =3 is quickly becoming a kind of condensed version of Funny or Die. The online video comedy destination started by Will Ferrell has long been a playground for high-profile and pop culture celebrities to poke fun at their own person and goof around with their image. I wouldn’t be surprised if the next time someone like Charlie Sheen has an epiphany/breakdown, he stops by the set of =3 for a quick co-hosting gig to show he’s still human and self-aware after all.