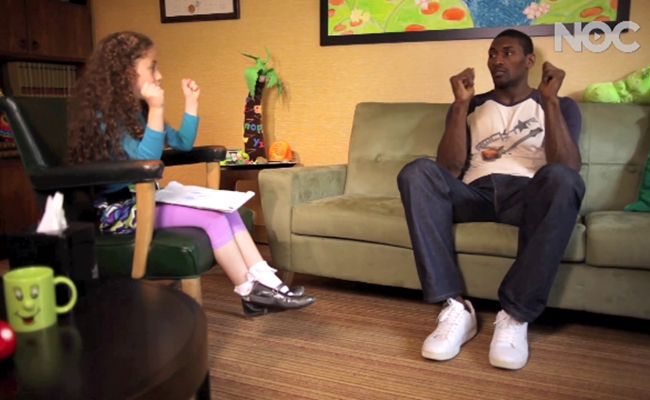 Metta World Peace AKA Ron Artest is one unpredictable dude. During his 14 year NBA career, the Lakers’ mercurial forward has incited an infamous brawl, legally changed his name, and released a terrible rap album, among other exploits. Now, World Peace is the star of a web series, Metta World Therapy, which has been released on premium sports channel The NOC.

In Metta World Therapy, World Peace sits down across from adorable kids, who give him psychiatric advice that is equal parts cute and ineffective. Of course, the young psychiatrists have a leg up; we all know sitting across from a precious child is an easy way to cure depression. Take a look at the first episode, which is chock-full of silly mental health suggestions:

Metta World Therapy is a funky mix of Kids React and World Peace’s personal views on mental health. In addition to thanking his psychiatrist on live TV after winning the NBA championship, World Peace has also been a long-time advocate of mental health, donating part of his salary and his 2010 championship ring to various psychiatric causes.

The NOC (pronounced “knock”) got its start as a founding channel in the YouTube Original Channels Initiative, and it is now over 169,000 subscribers and 25 million views thanks to a regular stream of premium content. The channel has seen good traffic on its Every Fan of the ____ series, which can be applied to any sport and features some consistently funny writing. Premium sports channels, with the exception of the NBA’s official feed, haven’t caught on the way gaming or music channels have, but by green lighting shows with notable celebs, The NOC could be about to break the mold. Metta World Therapy is a good start.