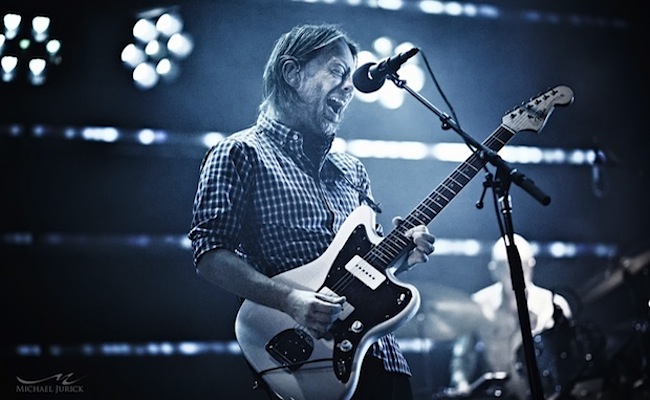 In 2004, three bad brothers you know so well handed out 50 camcorders to fans at a sold out Beastie Boys concert at Madison Square Garden in New York City. Ad-Rock, MCA, and Mike D told those fans to fight for their right for good camera angles and to keep the cameras rolling at all times. Two years later, the footage captured from the show was cut together and released as the concert film Awesome; I Fuckin’ Shot That! to mild critical acclaim.

This week, a Radiohead concert film dropped on YouTube that was kind of sorta conceived in the same way. The major difference is Radiohead Roseland Ballroom NYC 2011-09-29 Full Show multi-cam SBD audio came to be not from top-down instruction, but bottom-up organization and a fan culture reminiscent of Deadhead tape traders.

Basically, a handful of fans from Ateaseweb (an online hub for Radiohead fanatics) compiled fan-shot footage from Radiohead’s intimate Roseland outing in 2011 (one of only three shows the band played that year) and then solicited the band for an audio mix straight from the soundboard. Thom Yorke, Jonny Greenwood, Colin Greenwood, Phil Selway, and Ed O’Brien obliged.

The final product can be viewed on Allbearsrule’s YouTube channel, which is a mini repository of concert footage from rock bands and individuals, including Pink Floyd’s Roger Waters, The Pixies, Portishead, PJ Harvey and more.

This also isn’t the first time Radiohead’s given fans audio with which to make a concert film complete. Live in Praha was born from a process similar to the Roseland Ballroom’s conception back in 2010.