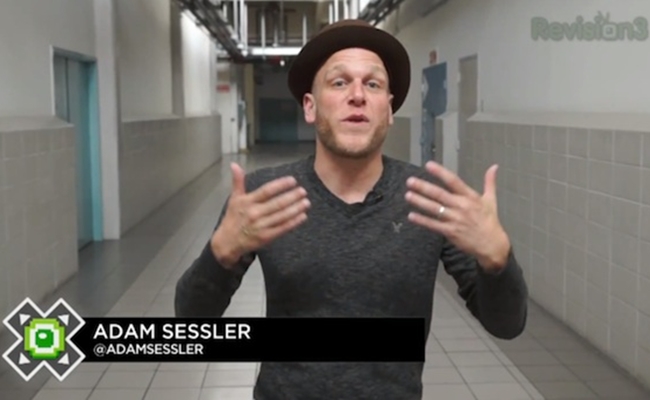 Revision3‘s Rev3Games has quickly become one of the most likable and entertaining gaming news teams on the Internet. The channel’s three hosts– Max Scoville,Tara Long, and Anthony Carboni–recently made headlines by hosting a 24-hour gaming marathon for charity. Today, that terrific trio became a fearsome foursome. Revision3 has announced that veteran gaming host Adam Sessler will join the network as an executive producer, where he will step in as a regular contributor to Rev3Games.

Sessler made a name for himself as a host of the humorous video game reviews show X-Play. Sessler was a host for over 14 years on X-Play, and he followed the show from TechTV to G4, where he and co-host Morgan Webb were a popular pair. Sessler left G4 in 2012, and by moving to Rev3Games he will be reunited with several of his former TechTV colleagues, including HD Nation and Tekzilla hosts Patrick Norton and Robert Heron. Sessler has released a video on the Rev3Games channel where he explains his new role while a camera follows him down a hallway. If was definitely a little…odd, but what Sessler had to say was more important than how he was saying it.

The witty Sessler’s move to Rev3Games seems like a match made in heaven, as the network features a quirky style in its reviews, previews, and original content. “I’m extremely excited to welcome Adam to Revision3,” said Ryan Vance, SVP of Programming and Production at Revision3. “I had the pleasure of working with Adam for many years, most notably on the creation of X-Play and can speak first-hand about his extensive creativity, expertise and stellar reputation in the gaming industry. We look forward to adding Adam’s creative vision to our existing gaming content and supercharging the Rev3 Games channel.”

In addition to his role at Rev3Games, Sessler will continue to work as a judge on SyFy’s Viral Video Showdown. Here’s hoping that his new gig will end up getting rated a 5 out of 5.