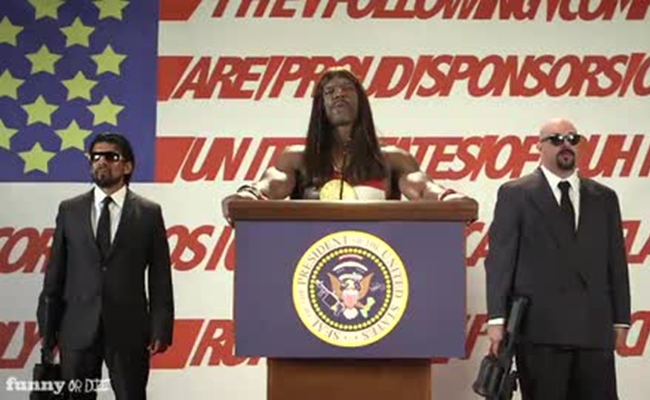 If you think our political situation is bad now, keep in mind that it could be much worse in the future. Director Mike Judge‘s ridiculous vision of the future was brought to life in Idiocracy, the film where dumb people ruled the world after reproducing at a faster rate than intelligent humans. One of the more memorable characters in Idiocracy was Dwayne Elizondo Mountain Dew Herbert Camacho, the professional wrestler/porn star President played by Terry Crews. Now, Camacho has returned, with Crews starring in five short videos on Funny or Die where the future President gives his views on how to solve America’s current woes.

The skits were written and directed by Judge, the cult favorite whose other works include Beevis and Butthead, King of the Hill, and Office Space (as an aside, I really liked Extract). His top-notch writing is in full effect here, as the President delivers several moronic solutions to our problems. My personal favorite was Camacho’s assertion that we can end our unemployment crisis by simply printing a lot of money. I also loved his campaign slogan: HOAP. All five of Camacho’s speeches are readily accessible on Funny or Die.

The return of President Camacho is well timed, and not just because  of the current election frenzy. Since his role in Idiocracy, Crews has gone on to wider fame thanks to his appearance as an Old Spice spokesman, which he turned into an online video gig earlier this year. Crews performance as Camacho bears a similar tone to that role, and I kept waiting for him to tell us that President Camacho gives you POWER.

It’s not every day we get a message from the future, so it would behoove you to take President Camacho’s words very seriously. Even if he is advocating taxing your poop.