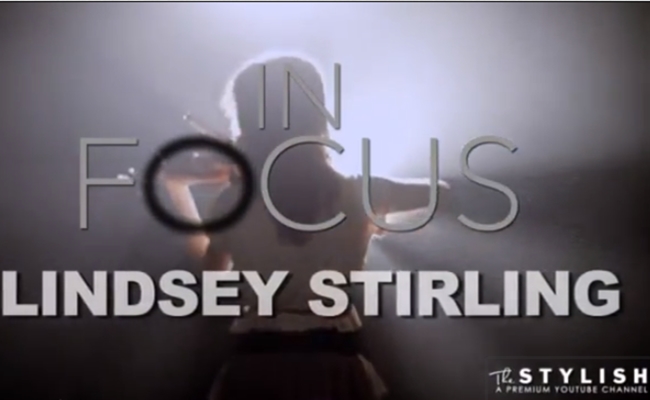 The Stylish Channel’s ‘In Focus’ Reveals Histories Of YouTube Stars

Violinist Lindsey Stirling has accumulated over 148 million views on YouTube with her whirling, gyrating, rocking brand of violin song and dance. Since losing on America’s Got Talent, Lindsey has refined her act and become a huge hit with both music fans and nerd culture aficionados alike. Now, premium content channel The Stylish is taking a look into Lindsey’s rise to fame in an episode of the channel’s new In Focus: YouTube Sensation web series.

The episode features interviews with Lindsey, interspersed with clips from her high-energy videos. It can be seen on The Stylish’s YouTube hub, which focuses on fashion, style, and wellness tips.

Lindsey rose to prominence on YouTube after failing to impress the America’s Got Talent judges, denying her the opportunity to score a record deal. She then took her act to YouTube, where she was an instant  hit. Many of her videos have focused on her playing music from video games such as Legend of Zelda or Skyrim while dressed in an appropriate costume. Other videos combine Stirling’s sublime dance skill with dubstep-infused violin music. Stirling hits a lot of buzzwords for success on YouTube: music video, dubstep, video games, etc. Being very attractive certainly doesn’t hurt.

In Focus previously brought viewers into the lives of big names in the fashion industry, and Stirling is logical choice for the new YouTube Stars focus given the manner in which fashion factors into her videos. Though much of the episode’s content explores Stirling’s relationship with her fans, it is especially noted that these fans help design Stirling’s costumes and official merchandise in a somewhat crowdsourced manner. The focus on fashion isn’t too overbearing here; Stirling’s inspirational story is the central element, and in this way YouTube Stars seems to differ from the previous fashion-flaunting In Focus episodes.

If you like stylish YouTubers, then this is a channel worth checking back on. Maybe we’ll see an interview with the thrift shop-hopping Macklemore. Now that guy’s got swagger.