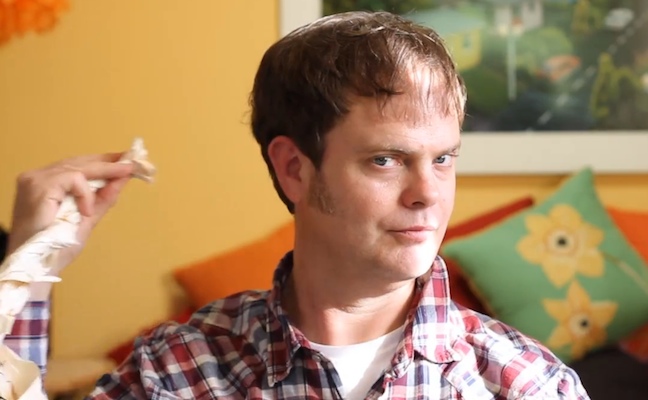 Ze Frank has uploaded 40-some-odd videos to his YouTube channel in the months since he raised $146,752 from 3,900 backers via a Kickstarter campaign to resurrect the internet’s preeminent video blog (from which all others are more or less derived).

In the span of those 40-some-odd videos, A Show has welcomed a handful of Sports Racers to make guest appearances and/or contributions on and/or to program, including at least one artist with an affinity for monsters and at least one talented actor from NBC’s The Office with a soon-to-launch YouTube channel that’s part of the video sharing sites $100 Million Originals Initiative.

Rainn Wilson stepped in front of the Ze Frank bookcase to help A Show’s host explain the complexity, confusion, and condition that is the teenage brain. More specifically, Rainn and Ze together fumbled through and later exquisitely answered a viewer’s question about why adults may tend to think the severity of a 13 to 25-or-so year old’s feelings are sometimes out of line with the reality of the 3 to 25-or-so year old’s problems (and why the thought processes of those  13 to 25-or-so year old’s extends to such extremes in the first place).

It’s a fascinating conversation/lecture that invokes scientific research from the last 10 years, a vareity of medical studies, and John McEnroe to educate and entertain. Check it out:

If you like the way Rainn looks on a YouTube video, you’ll soon have many more opportunities to enjoy his blend of humor, intelligence, and spirituality in online video form. Soul Pancake – his funded YouTube channel that “invites you to open your heart without feeling like an idiot” – launches July 23rd.