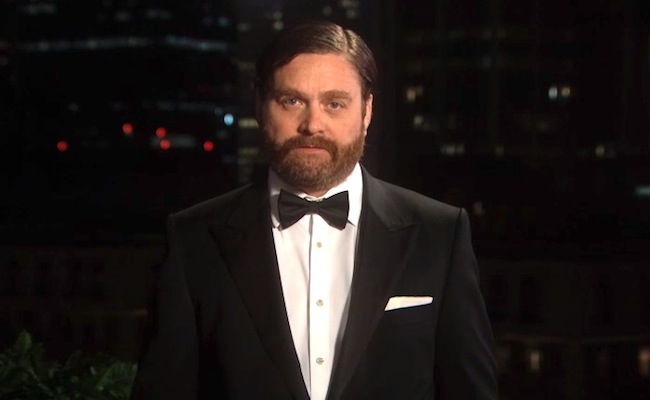 Did you tune into the 30-minute made-for-TV special of Funny or Die and Zach Galifianakis’ hit web series Between Two Ferns when it aired last Sunday, May 6 at 8:30PM ET before the Second Annual Comedy Awards on Comedy Central? If so, you’re one in a million.

The Sunday cable ratings are out and show Between Two Ferns: A Fairytale of New York (with special guests Tinay Fey, Jon Stewart, and Richard Branson) garnered 1,006,000 viewers who tuned into the program live or watched it same-day by way of DVR or other on-demand methods.

Not bad, right? It wasn’t able to beat out A&E’s Storage Wars (which attracted 1.5 million viewers in the same time slot) but did perform better than whatever aired on Comedy Central at 8:30PM ET the week prior.

But the number of television viewers A Fairytale of New York received is just a fraction of the online video viewers of any given episode of Between Two Ferns. The viewcounts of the 13 installments range from just shy of 11 million (that’s when Natalie Portman was a guest) to just above 4 million (when Jimmy Kimmel sat across Galifianakis on set). Of course, those numbers are aggregate and not for one day’s worth of viewing. A Fairytale of New York could accumulate a view count in the several million viewers range if you include all the future DVR and on-demand viewings, as well as factor in everyone who watches on ComedyCentral.com.

The big question is, is 1,006,000 viewers enough to convince the powers that be at Comedy Central to bring the show back on the air? No word yet, but it’s worth noting at the end of A Fairytale of New York, Galifianakis says to the audience, “I hope you enjoyed our show. We’ll see you back on the internet.”