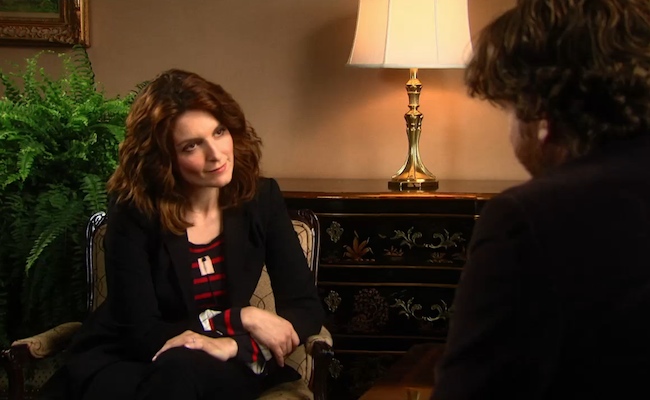 Did you watch the 30-minute made-for-TV iteration of Funny or Die and Zach Galifiankis’ hit web series Between Two Ferns last Sunday night on Comedy Central before the Second Annual Comedy Awards? If so, what did you think? Would you have given it a better grade than The Onion’s A.V. Club’s Josh Modell’s B+? I wouldn’t have! But I wouldn’t have given it a worse grade either.

A Fairytale of New York at once both elevated the status of Between Two Ferns and kept its status quo antetelevision. The celebrity interviews (of which Tinay Fey’s was the focus, but was split up by small segments with Galifianakis across from The Daily Show’s Jon Stewart and Virgin’s Sir Richard Branson), were the same celebrity interviews we’ve become accustomed to after 13 online installments of the series. They were fake, with overlying currents of self-aware insecurity and contempt for the “fatuous nature” (as Fey calls it) of the genre.

The parts between the celebrity interviews, however, were different. Instead of staying seated in a simple set with a black backdrop and okay greenery, Galifianakis plays host from a rooftop and takes us around New York City in a series of interstitials that are funny, but ultimately unnecessary.

Like when most programs make the jump from web to TV, the producers undoubtedly felt pressure to up the production value and give the audience something more. And it’s not that A Fairytale of New York’s “more” failed, the audience just didn’t need it. I, for one, would’ve preferred a few more minutes of celebrity interviews as opposed to seeing Galifianakis do things like semi-awkwardly, semi-jovially pick up a pair of ferns from Union Square’s farmer’s market.

If you didn’t catch A Fairytale of New York, you should. Comedy Central’s uploaded snippets of the individual interviews, or you can watch the entire 20-or-so-minutes of the program (and suffer through three commercial breaks with at least three commercials each) here. Regardless, make sure you watch the entire interview with Fey. The best part of the show comes when the creator/star of 30 Rock deconstructs Galifianakis shtick in a piece of meta entertainment at its finest.