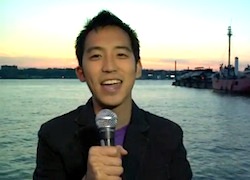 The YouTube Next Up initiative has helped foster and train fledgling online video talent with promise, but not necessarily the training, means, or production skills to elevate their status from mild-mannered online video amateur to paid entertainment professional.

First, the good people at YouTube bestowed a $35,000 check, entry into an exclusive four-day YouTube Creator Boot Camp, and the title of NextUp Winner upon 25 burgeoning new media content creators. Next, YouTube selected 16 trainers and 16 chefs to participate in the YouTube Next Chef and YouTube Next Trainer programs, which included three months of virtual classes held on Google+ Hangouts, as well as an equipment kit worth more than $5,000, filming and editing lessons, more than $10,000 worth of promotion on YouTube, and mentoring from some of YouTube’s finest content creators, including DeStorm, FreddieW, Michelle Phan, Chow.com and Billy Blanks.

YouTube Global Creator Initiatives Manager Bing Chen notes “there are still millions of creators who could benefit from participating in the [Next Creator] program,” but having already helped out individuals in the vierticals of All-Around Interesting Content Creators, Chefs, and Trainers, Chen and company are having difficulty deciding on which genre of YouTubers to target next. So, they’re soliciting your help.

Let YouTube know which type of content should be the focus of the next round of the YouTube Next program. There are a lot of categories from which to choose, but I’d go for politics. Given the upcoming election, the program could be a serious launchpad for the careers of some currently under-the-radar political pundits.