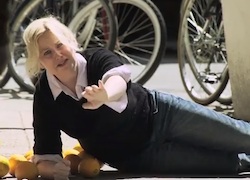 Amy Poehler got into the web series game back in November 2008 by way of the now defunct Austin-based new media studio On Networks and her online origina show Smart Girls at the Party.

The mission of Poehler’s program was to “help young girls find confidence in their own aspirations and talents.” Poehler executed that mission by interviewing smart, young girls with unique talents, community interests, and/or particularly engaging points of view. In the creator and host’s own words, the series is a kind of “funny, Charlie Rose style talk show for girls.”

Smart Girls at the Party will soon have a second life on YouTube. The program is one of the video sharing site’s selected channels that will receive a check for some fraction of $100 million in exchange for quality programming. But this isn’t the only web show Poehler’s successfully pitched to a large distribution network.

Nellie Andreeva at Deadline broke the news Poehler has teamed with FX to bring the New York City-based, female created and female starring web series Broad City to a television screen near you.

Upright Citizen Brigaders Abbi Jacobson and Ilana Glazer are those female stars and creators of this buddy comedy with a distinctly offbeat, young Brooklyn aesthetic and featuring a kind of technoligically advanced codependent relationship that relies heavily on video chat. Jacobsen and Glazer are slated to keep their starring and writing roles as they fulfill a script commitment from FX and embark on the first steps of their journey in bringing their web series to TV.

If you haven’t seen Broad City, you should. Give it a watch here.