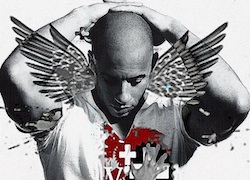 Vin Diesel currently has 28.2 million Facebook fans, which makes him one of the most liked entities on Facebook that isn’t a social network, video sharing site, international pop star, or Megan Fox. He posted the angelic picture you see to your left last Friday. In the last three days it’s accumulated over 85,000 likes, 7,500 comments, and 5,000 shares.

Diesel, his One Race Films, and Fox Digital Entertainment announced in February they would collaborate on The Ropes, a Vin Diesel-produced and Vin Diesel-guest-starring original web series based on Diesel’s experience as a muscley bouncer with an ear piece on the side of the velvet rope these guys want to be on. We haven’t heard much news of the project since the initial announcement, but Tambay at IndieWire recently stumbled across this behind-the-scenes video of The Ropes‘ EPK shoot by Echosworld Productions. Take a look:

If you can judge a web series by a video of its electronic press kit, The Ropes looks kinda okayish. But the quality of the program may not matter much considering Diesel’s online following. If and when The Ropes finally hits computer screens (the video above is from June 2011), it’ll be interesting to see how many Facebook fans convert into web series watchers, especially considering Diesel doesn’t have his own established YouTube or online video presence.

It’s difficult to gauge the impact Facebook has on the viewership of a web series. A program like The Annoying Orange certainly benefits from its 9.5+ million Facebook fans, but it’s difficult to tell how great that benefit is considering the show already has a huge subscriber base of 2.1+ million on YouTube.

If The Ropes ever gets released and if Vin Diesel markets the show through his Facebook page, it’ll be one of the first instances of a superstar with a Facebook following of the 25+ million fan variety and a YouTube subscriber base of near zero to use that Facebook following to get eyeballs watching his online entertainment property. Stay tuned to see the results.