Have You Watched a Ford Branded Web Series Lately? 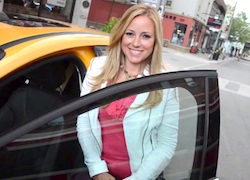 Sure, you may be familiar with Ford’s Bold Moves, the first foray into the world of original web series from a major player of the American automotive industry released way back in 2006 that was half authentic documentary of what goes on under the hood of a struggling domestic car manufacturer and half cloying ploy for sympathy from a struggling domestic car manufacturer.

But have you watched a Ford web series lately? If not, check out technology guru and online video personality Amber Mac’s branded program for Canada’s The Globe and Mail dubbed On the Road. You’ll see not much has changed in five years.

It’s not that the program attempts to tug at any emotional connection you may have to American manufacturing or the Ford brand. The storyline follows the script of your standard advertisement for motor vehicles. The camera pans along the Ford Focus’ sexy curves and zooms in on its innovative features, not executives and union workers fighting to resurrect a company in order to keep trying to live the American dream. And it’s not that the web series isn’t shot well. It’s pretty to look at and Amber’s more than a competent host. She takes you on a tour of things interesting in and around Toronto while highlighting those sexy curves and innovative features of that Focus.

What hasn’t changed is that both of these branded web series for Ford feel a lot like staid advertisements and less like something more interesting than staid advertisements. The same goes for much of online motor vehicle-branded entertainment. There are a few exceptions, for sure (and a great example from Ford Europe that shows how you can make a fantastic and interactive original branded web series), but it seems to be difficult for automotive companies to create something on the web that’s more than “Let’s shoot videos of and around the car!” and “Let’s have them shoot the videos from inside the car!”

All that being said, you should watch Amber show off the Focus’ automatic parking capabilities. We may not yet be riding around on hoverboards, but the future is most certainly here.