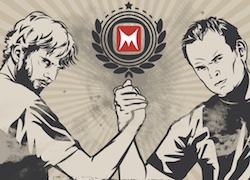 ComScore recently published the latest edition of its monthly U.S. Online Video Rankings and the biggest news since August is that not a whole lot changed in September. The data from the marketing research company shows a marked stabilization in the lists of both the Top 10 U.S. Online Video Content Properties and Top 10 YouTube Partner Channels month over month.

Google and Vevo maintained the #1 and #2 spots on the Total Unique Viewer Charts with 161.4 million and 57.3 million individuals respectively tuning in during the 30 days of September. Rounding out the rest of the top 10, in order are Micrsoft, Viacom, Facebook, Yahoo, Aol, NBC Universal, Turner, and Hulu, which (except for some minor jockeying of position) are the exact same companies in August’s Top 10 list. 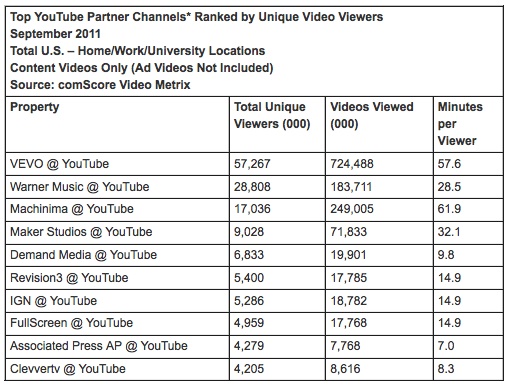 Again, those are the exact same Top 10 Partners on last month’s list with just a few minor changes in position. In fact, in the three months since comScore began tracking and reporting individual YouTube Partner data, there have only been 11 YouTube partners to make the company’s Top 10 Charts. George Strompolos’ FullScreen bumped NextNewNetworks from the list in August and the names of the partners haven’t changed since.

So, what does that mean? It’s going to be harder and harder for new partners to get massive view counts on YouTube as existing YouTube partners seem to be doing a very good job of maintaining viewership as well as rolling up burgeoning talent under the umbrellas of their multi-million viewer channels and networks. Baring any shakeups in the YouTube economy (one of which is coming soon), it seems like this group of 10 partners will continue to dominate the Unique Viewer charts for some time.

Aside from all that stabilization in the Top 10 lists, the neatest nugget of info I see from comScore is that your average Machinima viewer watches 61.9 minutes of Machinima content every month. That’s more time than viewers spend watching Vevo (60.2 minutes), Warner Music videos on YouTube (28.5 minutes), or any other online video property or network except for YouTube itself (where your average monthly video viewer spends six hours and eighteen minutes of his/her time).