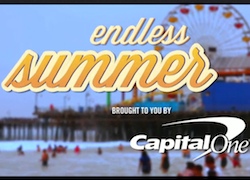 You’re the online video hosting, distribution, and advertising network of choice for thousands of creators of original web series. You just launched a newly redesigned, curated destination site, intended to highlight and showcase quality online programming in an easily navigable environment for current and would-be consumers of online video content. Because you often sell out of your ad inventory, you’re hoping this new site will attract more viewers, which will create more inventory against which you can sell more ads.

You’re certain the new site will naturally accrue more users over time, but you know it doesn’t hurt to accelerate that growth by marketing the property and its premiere content. And if an advertiser that wants to target young creators and consumers of online video programming is on board to craft a branded campaign that shares a few of your marketing initiatives, even better.

Such is the case with blip.tv and the Capital One Journey Student Rewards Card. Labor Day and Freddie Mercury’s birthday already came and went, but there’s still one week left for the the new media company’s and the credit card for college kids and vikings’ branded Endless Summer campaign.

Endless Summer is a curated festival that celebrates some of our favorite new web series, hosted by producer/actress Paula Rhodes (A Good Knight’s Quest) and sponsored by the Capital One Journey Card for students. Each week we’ll handpick a selection of awesome blip.tv episodes from different genres – like Sci-fi, Comedy, Women in Web Series, and Gaming – and we’ll release an interview with one of the web’s most popular producers from that genre (including Tony Valenzuela, Sandeep Parikh, Taryn Southern, and Sean Plott).

Produced by Big Fantastic, the weekly interviews give viewers a chance to meet the talent behind some of the web’s best content and learn about their journeys to becoming successful web series producers. After the interview, Rhodes also goes on a fun summertime journey of her own with, accompanied by that week’s interviewee.

If you’re wondering how the Capital One Journey Card is integrated into the campaign, those italics in the paragraph above should give you a hint. “Capital One wanted a content experience that drove home the brand essence of the Journey card,” explained blip.tv SVP of Advertising Sales & Creative Services, Evan Gotlib, “So each of the four content creator interviews represent the crux of the integration.”

The brand message and the Capital One presence is further reinforced by the branded Endless Summer page, content bumpers and end caps on the videos, and a sleek Facebook widget on both the blip.tv and Capital One Facebook pages.

“The whole idea here is that in the summer there is nothing but re-runs on TV,” Gotlib noted. “In Endless Summer we’ve got new episodes of terrific web series launching every week…it’s the place to be for new content.” Be sure to make your own journey over to blip.tv/endless-summer before this year’s autumnal equinox and check out the content for yourself.