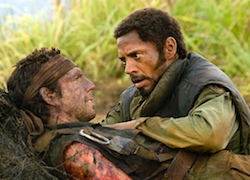 The trailers for never-made cinematic masterpieces Satan’s Alley starring Tobey Maguire and Robert Downey Jr. as Kirk Lazarus as Father O’Malley, The Fatties 2 starring Jack Black as Jeff Portnoy in a kinda Klumps reboot, and Scorcher VI starring Ben Stiller as Tugg Speedman are the best fake movie teasers you’ve ever seen. You’ll remember them from the second best movie (sorry, but I love me some Three Amigos) about a group of heroes in a guerrilla war they think is fake, Tropic Thunder. And the best news you’ll hear about fake movie trailers today is that Ben Stiller is making more of them.

Mike Fleming at Deadline.com broke the news Stiller’s Red Hour Digital will produce 12 faux trailers under the umbrella of the original web series The Fake Trailer Project, set to debut later this year. Stiller, Stuart Cornfeld and Mike Rosenstein from Red Hour will produce while Robert Cohen will executive produce and direct a few of the installments.

No distribution partners or advertisers have been announced for the series that we hear had a production price tag in the low seven figures. And no word yet on whether the trailers will also include parody consumables, like Alpa Chino’s Booty Sweat (aka Booty Juice for the Justin Bieber generation).

Stiller’s been relatively active in the web series space as of late. Late last year he was prepping Billy Glimmer (a scripted comedy for the web about a Las Vegas celebrity impersonator who’s no Frank Caliendo) and last fall directed his parents in Stiller and Meara.