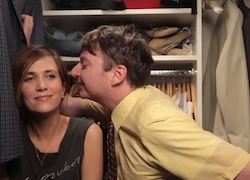 Mike Patrick O’Brien is almost a pimp and a writer for Saturday Night Live by way of Chicago’s famous incubator for comedic talent Second City. He’s also the creator and star of the latest addition to the Irreverent Celebrity Talk Show (not to be confused with the Faux Celebrity Talk Show) genre of original web series.

Like Diablo Cody’s Red Band Trailer (which is another recent addition to this particular brand of online video programming), O’Brien’s 7 Minutes in Heaven places our comedian creator opposite celebrities in an unconventional environment to discuss personal topics and partake in whimsical talk show sideshow bits. As the name would suggest to anyone who’s successfully endured the growing process of puberty, the program takes place in an unidentified closet filled with the vestiges of clothes worn in decades past (and O’Brien tries to get lucky with his guest at the end of each episode).

The set is cramped, but the acoustics are amazing and the location lends itself to stifled-laughter-filled segments of Closet Theater and Pretend This is Your Closet and I’m a Man off the Street and Stumbled in Here and You’re a Celebrity and You Don’t Want to be Recognized. Kristen Wiig plays the role of guest the best, but Elijah Wood and Bravo’s Andy Cohen still make for entertaining in-the-closet antics.

Mike O’Brien seems to have created 7 Minutes in Heaven, but it looks to be an official NBC production. SNL Associate Producer Erin Doyle is credited as Producer on the series, while SNL writer Rob Klein is on board as Director.

And as the name wouldn’t suggest, each installment of 7 Minutes in Heaven is about four-and-a-half minutes long. You can give it a look on Hulu and NBC.com in addition to its channel on YouTube. You should. This is one Irreverent Celebrity Talk Show to watch.