This has become an annual tradition for us here at Tubefilter, and it’s been a popular one as we sort through the hundreds of panels, screenings, signings and parties at San Diego Comic-Con 2011 to bring you fine readers our best picks for web series and online video specific events. It all starts this Thursday, and some don’t miss events this year include The Guild’s (possible final) appearance at SDCC, The Mercury Men’s panel with Syfy, a Dr. Horrible sing-a-long, ElfQuest, and, oh hey there, a little Tubefilter-sponsored New Media Meetup in San Diego.

And if this is your first time braving the teeming masses at SDCC, be sure to check out this handy video on What to Pack for Comic-Con from Elisabeth at TFAW.com.

(As always, we’ll keep updating this list as we hear of new events or schedule changes. Check back often.)

12:30 pm – 2:30 pm: Autograph Session: The Guild – full cast of The Guild will be at their booth this year (#4201) signing autographs and selling Season 1 through Season 4 DVDs, t-shirts from Jinx.com, and a variety of cast photos that you can get signed. If you make it there Saturday, remember to wish Sandeep Parikh (Zaboo) a happy birthday. (See: The Guild’s full Comic-Con schedule.)

5:30-7:30p New Media Meetup Sponsored by blip.tv, Tubefilter, and SAG New Media, and co-hosted by the League of Extraordinary Ladies, IAWTV and Celebrate the Web, join us for this informal mixer for new media folks at The Bristol Hotel. There will be food and drink specials with two bars set up—blip.tv and Tubefilter have generously donated drink tickets to the first 50 people in attendance. And don’t forget the FREE raffle drawings at 6:15 and 7:15. The Bristol Hotel (1055 First Avenue)

7:00-7:45p A Conversation with Felicia Day screening the trailer of Dragon Age: Redemption – At the Nerd HQ, Felicia Day screens the trailer for her new web series Dragon Age: Redemption. Check-in at 431 J Street, right next door to the Nerd HQ. Please check in the day before your Conversation, or at least 2 hours before the day of. Jolt’N Joe’s (379 4th Ave.)

7:15-8:15p A New Generation of Spike & Mike Animation — Spike and Mike Animation present a completely different animation festival from Sick and Twisted: A New Generation of Spike & Mike Animation. This show is more sophisticated and artistic, but still very cool, insanely humorous, and accessible. Featured are 16 international award-winning animated shorts, including Oscar nominees and winners. The show includes Madagascar , The Lost Thing, Pixels, Teclopolis, The Saga of Biorn, and A Morning Stroll. Spike & Mike have now partnered with Mondo Media (creators of Happy Tree Friends) to create a new YouTube site full of the best animations the world has to offer. Room 6BCF

7:30p-1:00a Revision3 Live Show at Comic Con! – Kevin Rose and Alex Albrecht will bring the fun, fan-filled Diggnation experience live to the stage so come join them and get your geek on! The Epic Meal Time guys will make their debut stage performance with a live show full of their bacon-obsessed, deep-fried, sauce-covered antics. Join Harley, Muscles Glasses and the other guys as they increase their cholesterol levels live on stage. And, once again, famed Video DJ Mike Relm will kick off the show spinning a mix of high energy dance beats with a dazzling display of video! This event is 21+ and FREE to the public. Access to the venue will be general admission/first come, first serve (RSVP does not guarantee entry) – so if you want a spot, make sure you get in line early! House of Blues (1055 Fifth Avenue)

11:30-12:30p Comic-Con How-To: Filmmaking by the Seat of Your Pants with Matt Haley and David Walker — The creators of the Internet viral hit Blackstar Warrior show how they pulled off the impossible, with no time and no money, but canny organizational skills and a love of professional filmmaking. Producer/director Matt Haley most recently illustrated the “Badass” book series for HarperCollins and the forthcoming How to Win a Fight from Penguin/Gotham. Writer David Walker is the author of Darius Logan: Super Justice Force, co-authored the book Reflections On Blaxploitation, and directed such films as Black Santa’s Revenge. Room 28DE

8:00-9:30p The Totally Rad Show: Live— Hosts Alex Albrecht (Diggnation), Dan Trachtenberg, and Jeff Cannata (Weekend Confirmed, Reviews on the Run) bring their Webby and Podcast Award-winning geek culture show back to Comic-Con for the fourth straight year. Join the guys for an explosion of movie, video game, TV, and comic book news and reviews, and see what makes this Revision3 show such an Internet phenomenon. Room 7AB

8:00-9:00p ElfQuest: A Fan Imagining from the Woods to the Web — Go behind the scenes with the cast and crew of ElfQuest: A Fan Imagining as they examine the changing landscape of fan fiction, social media, and the web. Moderator and cast member Taryn Southern (Battle: Los Angeles) chats with creators Paula Rhodes (A Good Knight’s Quest) and Stephanie Thorpe (Gold: Night of the Zombie King) about their initial Twitter inspiration, their crowdsourcing campaign, and the overwhelming fan response. Wendy and Richard Pini (ElfQuest creators) will be sharing exclusive, never-before-seen ElfQuest art and news from the eagerly anticipated Final Quest. Meet cast members Cathy Baron (In Time), Jamie Blair (What’s Trending), Traycee King (He’s Just Not That Into You), Casey McKinnon (A Comicbook Orange), Shannon Nelson (Drop Dead Gorgeous), Taryn O’Neill (Compulsions), Jessica Rose (Lonelygirl15), and Shanrah Wakefield (Oz Girl). One lucky audience member will win a pair of Pini-autographed elf ears from the production! Room 4

9:00-11:00p Syfy Screening: Eureka, Haven, and The Mercury Men — Imagine Greater with fellow fans during an advanced preview screening of the next all-new episode of Eureka, followed by a special presentation of an all-new Haven. And be sure to stick around for the exclusive premiere of the new digital series The Mercury Men. Introductions by Eric Balfour (Duke, Haven). Room 6A

11:00-12:00p Nerd Machine Conversation with Seth Green and Stoopid Monkey – Check-in at 431 J Street, right next door to the Nerd HQ. Please check in the day before your Conversation, or at least 2 hours before the day of. Jolt’N Joe’s (379 4th Ave.) 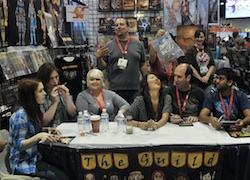 4:00-5:00p The Guild Season 5: Convention Timez! — In their upcoming season five, the lauded web series breaks out from behind the computers and takes the cast on a fun-filled road trip to a fan convention. Writer/producer Felicia Day (Dr. Horrible, Eureka, Guild), producer Kim Evey, director Sean Becker, and the cast of The Guild offer a discussion and Q&A, along with the debut of never-before-seen content, announcements, and other surprises! Indigo Ballroom, Hilton San Diego Bayfront

Got something web series or online video related to add? Let us know in the comments and we’ll add it. Unless it’s lame.

Photo above of The Guild courtesy of The One True Bix