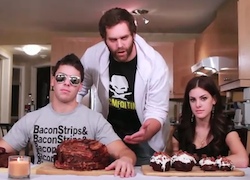 Harley Morenstein, Alex Perrault, and Sterling Toth started posting videos of their carnivore-inclined gastroporn under the banner of EpicMealTime in September of 2010.

Since then, the trio’s weekly videos of over indulgent, culinary creations that simultaneously make you salivate and want to regurgitate have racked up over 72 million views and garnered 600,000+ subscribers on YouTube (which currently puts them at 75th on the YouTube Most Subscribed All-Time Subscriber charts).

That’s one helluva great start for a web series. It was only a matter of time before a company who’s in the business of taking burgeoning online video stars to the next level of internet fame and fortune (a company like Maker Studios, The Collective, Fullscreen, or, to a certain extent, Revision3) snatched the Epic Meal Time crew up and signed them to a distribution deal and revenue share that offers better returns than YouTube’s Partner Program.

Today, Revision3 did just that.

Epic Meal Time is now part of the Revision3 programming family. You can still catch regularly scheduled episodes of the series on Epic Meal Time’s YouTube channel, but you’ll also be able to watch Harley and company from the friendly online video confines of Revision3.com. I caught up with Ryan Vance, Rev3’s VP of Programming, to learn how and why the deal came to be.

Ryan Vance: I took one look at this show back in December and immediately was hooked as a fan.  You sometimes just get the feeling that a show is something special, and that’s the feeling you get when you watch this show. The sense of humor and creativity of the guys was what really impressed me and gave me the sense that we’d love to work with them.

Tubefilter: How does this series fit in with other Rev3 shows? Does it need to?

RV: I’d say it appeals to a mainly male demographic, which is also Revision3’s main demographic, but beyond that, it’s just a quality peice of content.  It’s a food show without being a straight up cooking show: it’s more a celebration of food (which is how the EMT guys describe it). I’m just always looking for shows I think our audience will enjoy and this one definitely fits the bill. 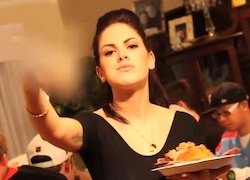 Tubefilter: Will this change the production output from Epic Meal Time? Will we be seeing more/different episodes? If so, what will those entail?

RV: They are going to keep churning out a weekly episode of Epic Meal Time but we’ve also been talking about additional content ideas that I’m really excited about.  These guys have a ton of new ideas that I think will be huge.

Tubefilter: Is the team staying in Canada and will they still be uploading to their YouTube channel?

RV: Yes, the team is staying in Canada. We want them to keep on making the great videos they’ve been churning out and we’ll handle the “network stuff.” In the short term, they will still upload to their YouTube channel, but the channel becomes part of the Revision3 network.

Tubefilter: Can you give me any insight into how these Rev3 deals with YouTubers work?

RV: We bring them into our Revision3 distribution network and offer around 40 additional distribution avenues beyond YouTube. We also bring them into our monetization model of in-show sponsorship that is the best in the business. We’re getting extremely high CPMs across all of our shows and these new shows can take advantage of that.  They also get the expert consultation and interaction with our programming and production group. We help these producers up their game in every aspect and keep evolving their content for their audiences.

Tubefilter: Can you tell me about any rev splits or what the deals look like? At least ballpark figures?

RV: Every deal is different. We share revenue with the creators and they end up making much more per episode than they have in the past.

The first Epic Meal Time installment under the new deal went live this morning. It’s called Fast Food Lasagna. I think I threw up a little in my mouth as I watched, which, if you’re a fan of the series, you know that means this episode is good.