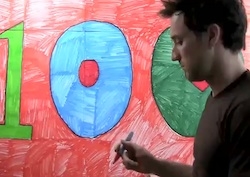 Josh Sundquist hit the 100,000 subscriber mark on YouTube this week, giving the Paralympic ski racer, motivational speaker and writer something more to celebrate. “The growth of my channel is due entirely to the awesomeness of the YouTube community. I especially want to thank iJustine. Even if I wanted to, I couldn’t possibly exaggerate how much she has helped my channel,” wrote Sundquist in his 100k video (below). Incidentally, he’s giving away the poster from the video to the fan that can guess precisely how long it took him to draw his 100k wall poster. [JoshSundquist on YouTube]

SOLO: The Series officially launched its Season 1.5 this week on YouTube, and is giving away an iPad2 and five Apple TVs to celebrate the launch thanks to new sponsor DataDirect Networks. The sweepstakes is only open to subscribers of the WatchSOLO channel, so, hint hint. “We are ecstatic that our friends at DataDirect Networks have jumped aboard to help us launch the remaining six episodes of our first season of SOLO,” said Jonathan Nail, creator-star of the show in a statement about the launch. [WatchSOLO on YouTube]

Olga Kay replaces fellow YouTube creator Brittani Louise Taylor as host of Relativity Media / RogueTV’s Tube Top series on their iamrogue channel on YouTube. Taylor launched the series and served for just 10 episodes before the changing of the host. Apparently that’s all part of the plan, as RogueTV tells us they plan on a rotating set of hosts, with Kay signed on for just the next five episodes. [iamrogue on YouTube]

AOL might be shedding blogs and staff this month, but video views at the network continue to surge upwards, taking over the #2 spot behind Google in the latest comScore data released this week. The network attracted over 57 million unique vistors in March who logged over 284 million individual viewing sessions. That’s a decent share of the 5.7 billion viewing sessions put in overall by online video viewers last month. [comScore]

Reckless Tortuga continues their Racism in America series with episode 4 (below). And if you know anything about YouTube commenters, there’s nothing more likely to incite the trolls than discussions of racism (besides Tea Party rally videos) and the comedy troop wasn’t afraid to go there. The “Housekeeper” episode, directed by RT’s Jason Schnell and written by Lindsey Reckis, explores the racial undertones of the homeowner-staff relationship, pushing it comedically far to spark the discussion. Well played, Tortugua. [Reckless Tortuga on YouTube]

HP-backed The LeBrons continues this week with new episodes of the 8-episode animated web comedy from Miami Heat star LeBron James. “Stay on the Court” (below) features “Wise” James dishing out some lady advice to Kid, while “Athlete” James thinks otherwise. [TheLeBrons on YouTube]

The Power of Words, a touching short video from Purplefeather has broken the 2 million view mark this week after making the viral rounds in email chains. The video (below), directed by Seth Gardner, is an homage to Historia de un letrero, The Story of a Sign by Alonso Alvarez Barreda. [PurpleContent on YouTube]

Got something for Quick Clicks? Email us at tips[at]tubefilter.tv!