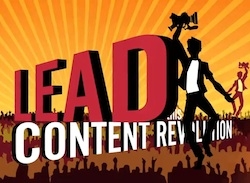 YouTube announced applications for its YouTube Creator Institute today which is the first initiative out of the newly formed YouTube Next. YouTube is looking for talented people in all fields—aspiring filmmakers, moms with cooking shows, teenage gossip vloggers, fantasy football commentators, ironing skydivers—and give them some in-depth training about how to make a real show out of their craft. Inaugural programs will begin at top schools like USC and Columbia College Chicago later this spring. Applications are being accepted from now until March 25 for anyone 18 and over in the US. [YouTube]

Our friends at Vimeo are throwing a bash with Nikon on Sunday night at SXSW with the mind-blowing Eclectic Method performing at the gothic Seaholm Power Plant in downtown Austin. [RSVP link]

RedLever announced it will produce and distribute director Kevin Tancharoen’s ‘first-ever original online martial arts competition series’ The Chosen One, which Tancharoen will direct. This is not to be confused with the Mortal Kombat web series, Mortal Kombat: Rebirth, that he is shooting for Warner Brothers. In this competition reality web series, hand-picked contestants from martial arts schools across the country will compete to be “The Chosen One” left standing at the end. Think your high kicks are worthy? You can still apply online now to be on the show. [The Chosen One]

Angry Birds is so pervasive now that it was only a matter of time before big endorsement deals started calling. Microsoft’s ‘decision engine’ Bing has tapped the animated birds for a number of short online video ad spots on YouTube that are masquerading as a web series. Let’s not kid ourselves, these are just ads, but still worth watching to take a break from trying to beat level 15-7. [CNET]

KoldCast.TV has picked up 24-episode sci-fi fantasy series Mind’s Eye for distribution. “Entangled in a supernatural war, the world’s greatest heroes must disguise themselves as children to protect humanity’s last hope.” Great to see a story aimed at a younger audience, with the central character a 12 year-old boy who likes to draw, build forts and fantasize about far off lands filled with Knights and Wizards and Pirate—sweet! [KoldCast.TV]

Ray William Johnson released ‘Club Villian’, an animated music video (below) to a song he wrote and performed. Johnson continues to tear up the most subscribed list on YouTube and seems ready to knock Ryan Higa off this top spot later this spring at the rate he’s going. The video is under his YourFavoriteMartian secondary channel, which itself boasts over 600k subs. “Patrick Bateman passed us shots of vodka. Me and Jabba tossed them back like ‘oooga chaca!'” [YourFavoriteMartian on YouTube]

VEVO will be live streaming Bonnaroo Music Festival this year with select live and on-demand performances and artist interviews from the landmark music and camping festival set for June 9-12 in rural Manchester, TN. The four-day live stream is being made available free to fans thanks to lead sponsor Ford which is picking up the tab. [VEVO’s Bonnaroo Channel]

About Abby has a new episode out, its third so far, this time with guest star Eric Lloyd (remember him from Santa Claus with Tim Allen?) coming on for the musical episode (below). [About Abby on YouTube]

Puppet Hero? This video (below) came in through the tips box and successfully made us watch it through twice to see what was what. There’s no way this is real, but still pretty crafty with a nice touch in the Spanish newscaster voiceover. A robbery perp is thwarted by a mysterious orange sock puppet vigilante that apparently the cops are now looking for. [YouTube]