Oscars Get Autotuned by the Gregory Brothers

The 83rd Annual Academy Awards was a 180+ minute affair full of half-hearted attempts to make the extravagant, star-studded ceremony attractive to a younger demographic. 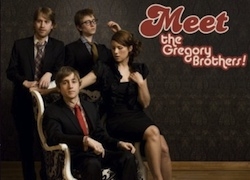 Inception and Alec Baldwin provided the inspiration for an opening video that would’ve been far better executed by the MTV Movie Awards. Justin Timberlake messing around with an iPhone app to animate the Oscars’ stage just looked lame. And I could list a few more things that didn’t work out well for the show if I hadn’t taken a queue from hosts James Franco and Anne Hathaway and been kinda whatevs about the whole thing.

But there was at least one moment when the producers of the awards took aim at appearing hip to the online-savvy cool kids and hit the mark. That happened after Franco and Hathaway introduced the Gregory Brothers’ contribution to the show.

The creators of Auto-Tune the News remixed clips from four of the past year’s biggest films – Harry Potter, Toy Story 3, The Social Network, and Twilight – into a musical number that concluded with Taylor Lautner’s abs. It wasn’t as great as Auto-Tune the News’ normal fare, but it was still good. The best thing about it, though was the fact the Gregory Brothers created it.

Two years ago, ABC and the producers of LOST debuted the web series LOST: Untangled, featuring toy action figures from the hit show. A clever idea, and one The Fine Brothers had already thought of for their series LOST: What Happens Next?

Untangled was created without any help from, or outreach to The Fine Bros., which is totally within ABC’s prerogative. The network owns the rights to the characters and can do with them as it pleases, but it would’ve certainly been gentlemanly to at least reach out to the independent content creators who came up with the idea first and seek their involvement on the project.

The good people at ABC could’ve easily done the same with the Auto-Tune idea; create a piece of content derived from the work of the Gregory Borthers and not solicit their involvement. But they didn’t. And that’s refreshing.

The Academy of Motion Picture Arts and Sciences has a limited window in which it can use clips from movies in association with the Oscars ceremony, so you won’t see any uploads of the vid to YouTube.com/schmoyoho. You will be able to catch the Auto-Tuned Oscars for a limited time on Oscars.com, or check YouTube for illegal uploads.