It’s Grammy time in Los Angeles, and this city has officially caught the Bieber Fever, further proving that this world is indeed run by 13 year-old girls. Anyone catch Bieber on Jimmy Kimmel last night? The love triangle between the 16 year-old star, Kimmel and P Diddy was anything if not disturbingly telling of how far this outbreak has gone. 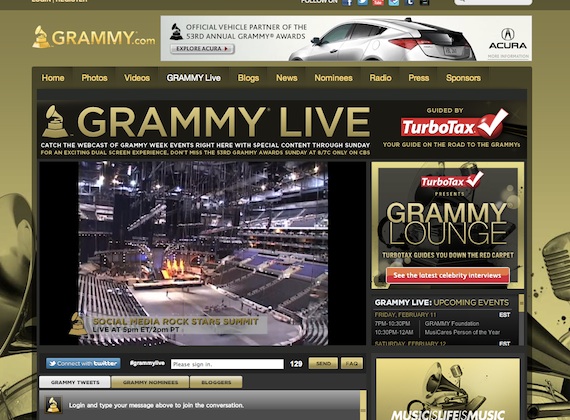 If the Justin Bieber movie premiere wasn’t enough, today kicks off the 72-hour live streaming pre-show for the 53 Annual Grammy Awards. The marathon of live coverage and backstage moments begins at 5pm (ET) on the Grammys YouTube channel and on the main Grammy Live site.. To host, the Grammys team have brought back Shira Lazar for the second straight year, this time flanked by former MTV VJ John Norris and comedian Ben Gleib.

Kicking off the coverage is the return of the Social Media Rock Stars Summit, this time featuring Adam Lambert and Chamillionaire sitting down with the brains behind Facebook, Foursquare and Pandora.

TurboTax has come on as lead sponsor of the live web show, reminding us that we need to get our taxes done—lest we end up like Nas or Willie Nelson. And LiveU is back to provide the Grammys to with their mobile live streaming backpacks. The backpacks are engineered to combine Verizon, AT&T, Sprint, and T-Mobile wireless services together—3G and 4G LTE/WiMax—giving HD-quality video feed in places where there’s spotty connectivity in low-coverage or congested areas.

And, once more for safety, Bieber and P Diddy: