Jennifer Aniston Has Too Much Tequila on ‘Between Two Ferns’

If you’re a starlet or It girl who’s out of the limelight and gained her faux-celebrity status from having 3.7 million friends on a now second-tier social networking site and by hosting a reality show where both men and women compete to be the objection of your affection, there are two ways to reclaim your relevancy:

1) Release a sex tape.
2) Go on Between two Ferns with Zach Galifianakis. 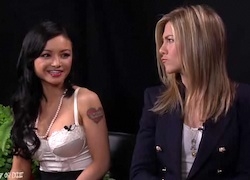 In the latest installment of the Funny or Die original series, Tila Tequila sits across from Galifianakis, hitting softball questions out of the park with a kind of composure that’s all too receptive to our bearded host’s amorous advances. Then Jennifer Aniston shows up, welcomed by half-MIDI-fied Friends theme music blaring from a Staples “Easy” button.

Aniston’s not frustrated with Tequila, but she becomes quickly agitated with a Galifianakis who’s clearly only interested in talking to social networking’s first celebrity social networker. Our host doesn’t give her the bag-on-the-head-Matt-Zaller treament, but it’s close enough. Between that, the questions about atomic war, and the guy in a giant, life-sized Speed Stick suit, Aniston’s ready to give Galifianakis a foul-mouthed piece of her mind, all under the sounds of that half-MIDI-fied Friends theme music. Awesome.