I met Zooey Deschanel once. She was volunteering at the ASPCA on Manhattan’s Upper East Side and I was looking to adopt a dog. One of the questions in the adoption application is “What are you looking for in an animal?” I wrote down, “Inner beauty and a kind soul.” Zooey laughed when she read it. Then we got married, but I had to jet because I was too scared she was going to eat my soul. That’s when she met Ben. Later she would describe that period in her life as “decided by fate.” But I digress… 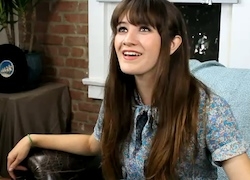 Based on my 120-second or so interaction with the real deal, I can tell you aspiring LA-based actor and improv comedian Noel Kristi Wells does a great Zooey Deschanel impression. It’s not Adam-Sandler-impersonating-Axl-Rose amazing, but it definitely works. See for yourself on The Zooey Deschanel Show.

Wells nails Deschanel’s default face, a big-eyed distant stare, both thoughtful and confused that appears pretty with a thin veil of morose. Wells’ exaggerated lisp is good, too, but the writing and her pensive delivery are what makes The Zooey Deschanel Show worth watching. It’s all just a touch more absurd than what you’d expect from Deschanel herself.

Add it to your list of “Web Series Featuring Worthwhile Celebrity Impressions I Should Check Out,” and next time you’re done catching up on episodes of Very Mary Kate, click over to The Zoey Deschanel Show.