Justine Ezarik is an LA transplant from Pittsburgh who made a name for herself by accumulating a ridiculously long iPhone bill, being the first female lifecaster on Justin.TV, loving Apple, and having one helluva prolific online video presence.

She used to do graphic, web design, and video editing work under the banner of Tasty Blog Snack, but now she’s the entertainment personality and social media powerhouse known as iJustine. And starting Thursday, January 27 you can watch her on an entertainment platform other than the internet (and I’m not talking about those Mozy commercials).

The show is the cable television iteration of the uber-popular online destination for all things gaming, GameTrailers.com. Keighley and company report on the “fast-paced world of gaming, featuring world exclusive first looks at the hottest games of the future,” while Ezarik is on board to give the show some online cred and act as a weekly correspondent, covering the tech beat. She’ll be shooting segments from the field and in-studio on “everything from robots to tablets to 3D televisions.”

I caught up with Ezarik over the phone to find out how she got the gig, what it means for her YouTube videos, how she feels okay about wearing 3D glasses, and how much she likes Call of Duty: Black Ops.

Tubefilter: How’d Spike TV find you?
iJustine: The producer of GTTV with Geoff Keighley was looking for a host. It was the day before they really needed to find someone and they happened upon my YouTube videos. I came in for an audition and a few days later I was at CES shooting a several segments for them. 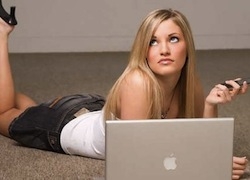 Tubefilter: What will you be covering on GTTV?
iJustine: I’m doing more tech coverage. I’ll be trying a lot of products out. Not just telling you what they are, but actually testing them out in the field.

Tubefilter: So like CNET but cooler?
iJustine:Ha! I guess you could say that.

Tubefilter: Did you see anything at CES you were super excited about?
iJustine: This year felt like it had a lot of the same things as last year, just a little bit better. There wasn’t that one, must-see product everyone was raving about. But I did like seeing all the cool cameras, TVs, gadgets and meeting really great people. Oh, and the LG 3D Cineman Display TV’s looked good. I have a Samsung 3D TV at home, but I don’t really watch the 3D that much. It kinda gives me a headache.

Tubefilter: Does it actually give you a headache or do you just not feel comfortable with how you look wearing 3D glasses?
iJustine: No, I’m cool rocking the glasses. They did have some fashion and prescription 3D glasses at CES. I may get one of the prescription pairs because I do feel kinda stupid when I have to wear my regular glasses and 3D glasses at the same time.

Tubefilter: Will the job at GTTV affect your output of YouTube videos?
iJustine: Definitely not. And this year, I’m totally trying to get on a schedule for my videos. I go to all of these panels, and all of my friends say you need to have one, so I’m like, “Justine, step it up!” Hopefully, I can get on some type of program. But, yeah, it won’t interfere with my output.

Tubefilter: Any chance you could be covering videogames for GTTV in the future?
iJustine: I absolutely love video games, so I wouldn’t say no to anything video game related. My favorite right now is Call of Duty: Black Ops. I CAN’T STOP! I was hoping I wasn’t going to be in the middle of a match when you called. I was just finishing up when the phone rang so it worked out perfectly.

Check out iJustine on GTTV starting Thursday, January 27th at 1:10 AM ET/PT on Spike.