Delicious may still survive, but user generated content on Yahoo Video will not. 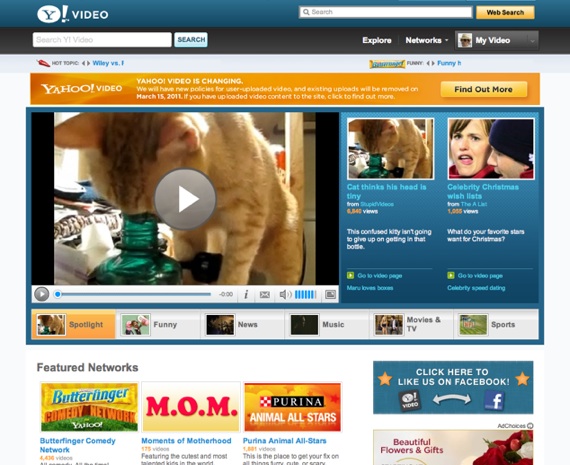 Yahoo announced last week, amidst a flurry of press related to the internet and online services conglomerate cutting and merging some of its major products, it will no longer allow users to upload content to its video site. And, come March 14, 2011, it will completely remove all UGC from Yahoo Video. Here’s the official notice:

On December 15, 2010 the functionality to upload a video to Yahoo! Video was removed and a download utility, available through March 14, 2011, was added to users’ video profiles to allow retrieval of content. The user-generated content will be removed from Yahoo! Video on March 15, 2011. We apologize if this causes you any inconvenience.

At one point in time, Yahoo put up a decent fight against YouTube for supremacy in the realm of user-generated content, but it’s long since settled into a distance second place on the US Online Video Rankings charts. Yahoo, no doubt, is hoping Flickr video will capture some of its lost Yahoo Video market share, but I also think the company is happy to be done with UGC, especially since its professionally-produced video content is doing so well.

Marisa Guthrie at The Hollywood Reporter broke the news last week Yahoo is expanding its Who Knew? web series. A special, 12-episode spin-off series of the insanely popular Yahoo original (Guthrie reports the show’s seen 71 million streams since its launch in April) will appear on the Yahoo-owned entertainment news site omg!. The Who Knew? on omg! will focus on celebrities, their families, and show sponsor, the Toyota Highlander.

The new iteration of Who Knew? is the latest of many web series announcements from Yahoo. It’s roster of online, original programming includes TV in a Flash, What’s so Funny?, Spotlight to Night Light, Primetime in No Time, Life Unjarred, TechTicker, Sports Minute, and the Ben Stiller-directed Stiller and Meara. The company also signed a production partnership deal with WPP’s Group M Entertainment earlier this year.

Like AOL, Yahoo’s leveraging its massive traffic (179,000,000+ monthly uniques) and turning those visitors into views. When you have a slate of web series that’s advertiser-friendly and reaches at least 71 million eyeballs in less than nine months, who needs to be a hub for user-generated content, on which no one will advertise?