YouTubers and Next New Networks Bring the ‘Comedy Thunder’

What do you get when you bring together eight popular comedy troupes with established YouTube presences and 12 consecutive weeks of thematic “sketches, pranks, music videos, parodies, spoofs, and more”? A pretty good idea. 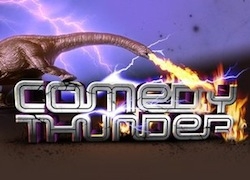 Every Thursday for the next 11 or so Thursdays, the aforementioned comedy channels will upload their videos based on the theme of the week. Audiences get eight weekly videos to watch, the comedy troupes get cross-promotion from one another (which will hopefully increase every channel’s viewership and subscriber counts), Next New Networks gets a couple hundred thousand views a week on which it can try to sell sponsors, and everybody wins.

The eight Halloween-themed videos from the first week of Comedy Thunder have so far collected a total of 590,000+ views, due in large part to GoPotato TV’s contribution 13 Halloween Costumes You’ll See at Every Party.

“We had been thinking about doing a sketch comedy network for a long time,” Kathleen Grace, VP of Programming at Next New Networks explained. “So when we started to bring on a few sketch comedy channels into the Next New Creators it was the perfect reason to launch.”

Grace said Next New Networks is talking to a few sponsors interested in making it rain on Comedy Thunder, but no deals have yet been signed.

Ultra Kawaii fans get pumped! Next week the Comedy Thunder theme is “cute animals.” Be sure to check them out at YouTube.com/ComedyThunder.