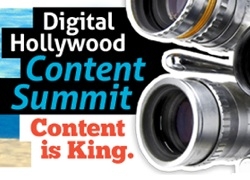 Imagine a cross between TechCrunch50 and American Idol. That’s essentially how this will go down. Tomorrow morning at 9:00 am sharp, (Oct. 20) at the Digital Hollywood Content Summit, we’re hosting a web series pitch camp session, where four teams of creators will have 5 minutes to dazzle a panel of digital entertainment execs before facing their unfiltered grilling.

After last week’s call for entries, we had over 50 web video projects submitted, some of which blew our minds. Many very creative ideas were in there, and sadly we couldn’t feature them all. To make this most useful to the audience we wanted to showcase a variety of formats, genres and styles.

The Lights is a fast paced web show for the social media generation that follows a rolling cast of “femmetrepreneurs” on the rise.

InTransit is a travel series highlighting the realities of a journey, the ups and the downs. This series follows Peter Bragiel as he utilizes public transportation from Los Angeles to the Panama Canal. It is a 4,000 mile overland adventure covering 7 countries on a shoestring budget.

A total of 26 episodes of this series has reached 500,000 views and still growing. Also, the the past two trips have reached 2 million views in total.

Blue Movies follows the story of a struggling pornography company in the San Fernando Valley fighting to become number 1.

The series is a critical success, has been seen over 4 million times, received a Streamy nomination for Best Director in a Comedy, and played at several film festivals. A second season, written and designed to be a cross-platform release as a web series and feature film is already written, and Jareb Dauplaise, star of MTV’s The Hard Times of RJ Berger, is set to star in the second season.

And looking at the panel of execs, there’s at least two potential Simon Cowell’s in this lot.

If you’re even thinking about pitching a web series or online video project in the next year, this is not one to miss. So get up a little earlier than most of Los Angeles, and head over to the Loews Beach Hotel in Santa Monica for this panel.Hear what the pro’s think is selling and getting greenlit in today’s market, and what a web series needs to stand out these days.