Funny or Die’s Undercover Karaoke is like MTV’s Punk’d, except everyday Joe plumbers are the ones that get fooled, pop icons don’t cry, and everyone leaves the scene with warm fuzzy feelings.

Jewel stars in the web series’ premiere (and so far only) installment. The episode’s been viewed more than 3.3 million times, was conceived by comedy writer Eric Appel, and goes a little something like this: 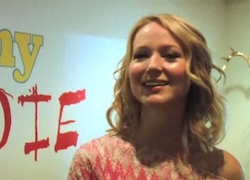 A team of makeup artists did Jewel up to look like middle management at a national agribusiness corporation. All brunetted out, she throws back a few beers at a local karaoke bar with “colleagues” who “peer pressure” her to take the microphone. She sings Save Your Soul and totally nails it. Real Jewel (sans glasses, wig, fake nose, and plump suit) takes the stage a few minutes later to sing another number.

It’s a cute, family friendly take on hidden camera shows with innate star power that the whole family can enjoy. And that’s probably why TBS picked it up.

The basic cable television channel ordered a pilot of Undercover Karaoke, which Funny or Die will produce. The AP reports Funny or Die co-founders Will Ferrell and Adam McKay will contribute.