By all accounts, the Old Spice Man video series was a runaway success. On YouTube, Old Spice’s channel is both the #1 most subscribed and most viewed amongst sponsors with over 150 million views to date. That, and a sizable 106% bump in sales of Old Spice body wash for the four weeks after the campaign began.

Fast forward to the fall and every marketer around is trying to reverse engineer the campaign to isolate just what created that perfect storm of virality, levity and sex appeal. The latest is European telecom giant Orange which just launched its “Singing Tweetagrams” campaign in the UK.

The concept should sound familiar, you send a tweet this week using the hashtag #singingtweetagrams, and “within a few hours” you may see your tweet brought to life as a throwback radio spot by a singing trio called the Rockabellas. It’s the responsive on-demand style personalization that was at the core of the 180 or so videos that came out of the Old Spice Man this summer.

Poke London is the team behind the campaign, the same shop that helped Orange create its online film site, Orange Film Studios.

Why This Won’t Work 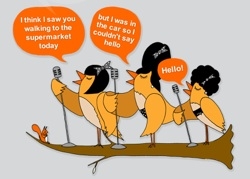 So far the only online video out from this is the kickoff video above, which is noticeably devoid of any live action humans. (Total view count on the video is just 1,648 as of this writing.)

The ladies that sing the tweets are attractive spot-on talented in nailing the retro radio spot feel for these. But why can’t we see them singing to us?

The miss here is the false assumption that it’s Twitter that made Old Spice pop, when really it was a viral video success that happened to move its user commenting over to Twitter. But how many viral tweets have you actually seen? As Bill Clinton would say, “It’s the video, stupid!”

Let’s face it the 20+ million views that Tom Kuntz’s original TV ad spot— starring Mustafa—earned on YouTube was a solid anchor for online phase of the campaign.

Many a YouTube success has been made on the back of one or two breakout videos that captured enough attention to sustain an audience with still respectable numbers on their follow-up videos.

So far I’m counting about 84 personalized tweets on the site already, many of which are pretty well done. The problem is I can’t even embed my favorite ones here in the article. You’ll just have to click through 14 pages of tweetagrams to listen to the results.

Online videos, on the other hand, are designed to be shared, embedded and spread from the get-go. That would have been the much smarter choice if you ask me.