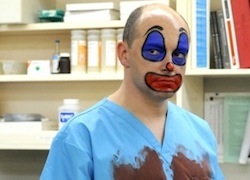 For the first cable television season, Corddry and crew compiled Childrens Hospital‘s original web run into a series of 15-minute installments. When those performed well on their new medium, Cartoon Network ordered a second season, which is currently running until November. And with ratings up double digits in some demos (and triple digits in others!), the network is planning a third season set to air in the second quarter of 2011.

Childrens Hospital isn’t the first web series to make the jump to TV, but it’s arguably the web series that’s had the most television success. The College Humor Show was picked up by MTV and not renewed after its six episode run in 2009. In the MotherHood went from MSN to ABC and was cancelled after a four month run on the broadcast network. The only web show that’s now a TV show that comes close to Childrens Hospital‘s success is Sanctuary. Syfy picked up the independently produced web show in October 2008 and is currently airing its third season.