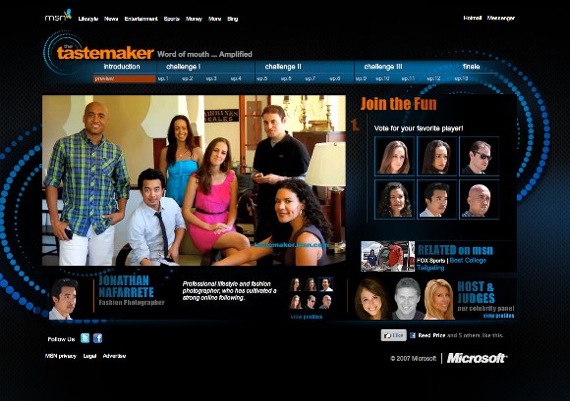 MSN is jumping on board the latest trend in original web series—reality TV-style shows—with its new hosted competition series The Tastemaker which launched today. The series features six social media influencers battling it out for a $10,000 prize as “The Tastemaker.”

In the running for the top spot are web series host Jesse Draper (The Valley Girl Show), along with Christine Esther, Jonathan Nafarrete, Brett Gursky, Raymond Roker and Morgan KcKean. The show makes no excuses for the fact that this is essentially an online popularity contest, even titling its first fan voting as “The Official Tastemaker Popularity Contest!” on Sodahead.

Judging the competition are some recognizable faces in the web video world all with their own social media followings including Shira Lazar, Kelly Perdew (Season 2 winner of The Apprentice) and “adventuregirl” Stefanie Michaels. Each episode is laid out as a “challenge” where, in typical reality show fashion, contestants face elimination. A rotating roster of guest judges, like Episode 1 guest Jason Pollock.

“I think this show was an obvious next step in programming for the social media world,” Lazar told us. “I can’t tell you how many times people have wondered why there’s not a competition show around this community. Someone was going to do it and I’m proud to be part of a first.”

With Hulu’s Simon Fuller-backed web series If I Can Dream serving as the web’s Big Brother, and Seth Green’s upcoming subservient chicken experiment ControlTV, it seems that reality TV is in fact invading the web in full march. It was bound to happen eventually.

“Using the internet for a reality show is an obvious fit,” added Lazar. “It is in of itself an interactive platform, so I definitely think we’ll see more content in that vain where creators are taking advantage of engagement both online and offline to make the experience more unique, accessible and fun for viewers.”

Unlike many web series to come out of MSN, The Tastemaker isn’t a standard branded entertainment setup, with product placement and overlays. Other than the mandatory Microsoft Silverlight install needed to watch the show, it’s remains fairly brand-free.

Agility Studios, most notably know for their dance epic The LXD, developed the series in what they call a “fairly traditional network-studio relationship with our friends at MSN.” Agility CEO Scott Ehrlich tells us that the first run of the series will be the main focus, but future seasons could be in store. “We’ve had some international interest in the format, and future seasons have certainly been discussed,” said Ehrlich, “but first things first, our focus is on making this six week adventure fun and engaging for our audience, contestants, judges and of course our beautiful host.”

“I’ve always wanted to host a reality competition, so I couldn’t think of a more fun and suitable project to do so,” added Lazar.

The series will run for six weeks, in three two-week task cycles, with the finale airing on October 21st.