Kevin Smith’s SModcastle is the Stone Pony of Podcasts 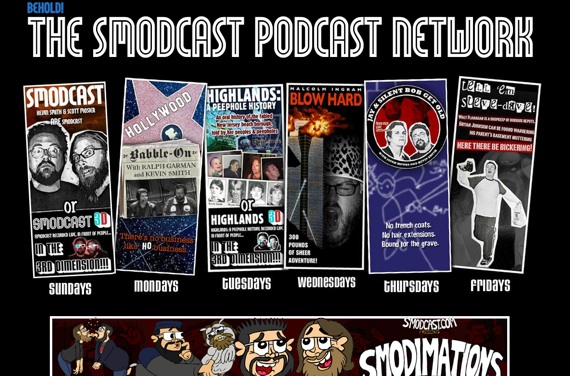 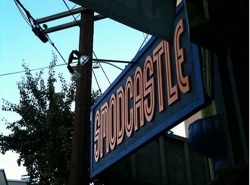 The line on this particular Saturday night snaked down Santa Monica Blvd. full of eager fans ready to pack into a small nondescript 50-seat theater in Hollywood’s Theater Row. Nothing out of the ordinary for this neighborhood, except that they were all here to watch a web show. I tagged along with this crowd for opening weekend of Kevin Smith’s SModcastle, the new home to his burgeoning network of podcasts with his friends.

When you walk into the place, you can tell that the Clerks director and New Jersey native had his hands dirty with every detail of the renovations on the place, right down to the New Jersey Devils carpeting and hand railings made from hockey sticks. I’m there for what seems to be the flagship show of this theater, a taping of Smith’s already popular weekly SModcast 3D show with his co-host (and producing partner) Scott Mosier.

The two take the stage for an hourlong back-and-forth intellectual diaspora of pop culture, movie references and hypotheticals—you know, the kind of 3am conversations you had in college with your buddies while re-watching Lebowski for the 18th time. They rarely look at the 50 or so of us in the audience, instead fixated on each other, only passingly aware that anyone is eavesdropping.

Smith’s goal is to host podcasts every night of the week, making a physical homebase for developing audiences for a gambit of mostly comedy shows with names like Highlands 3D, Hollywood Babble On, Jay and Silent Bob Get Old and even Blow Hard, a new Sunday night podcast with Smith and fellow director Malcolm Ingram that leaped to #1 on the iTunes podcast charts in just 24 hours after its launch.

I had a chance to catch up with Smith on his plans for his new SModcastle, egging him into actually turning on some web cams and crossing into web series waters. (So far, he wouldn’t budge on sticking with just audio, aside from his SModimations animated series, but maybe that’s all part of his Devils-style ‘blackout theory’..)

Tubefilter: Have you ever considered adding some cameras to your setup and publishing video along with the audio?—similar to shows like Kevin Pollak’s Chat Show, where it’s hybrid of a podcast and a web show?

Kevin Smith: I was raised on comedy albums – records that my Dad would bring home from the Post Office. Some guy at his work sold them out of the trunk of his car. Or maybe Dad stole them out of the mail – who knows. They were used, though, so it was probably the trunk deal. I listened to Carlin, Cosby, and Kinison over & over. LISTENED, more than watched. SModcast exists because of those records: it’s a weekly way for me to do a comedy album akin to the stuff I grew up on, so it’s only fitting we keep it an aural experience. Plus, how visually interesting can it be? It’s just two people sitting and talking. I’m not really interested in doing a web show; I’m more into doing a live show, from time to time instead.

When we took the podcast on the road, we added the live element to SModcast, and it generated a COMPLETELY different hour of chatter: suddenly, we’re playing less to each other and more to the audience. It could never replace what we call the “home” SMod (verus “away”), but it brought a different flavor into the mix, calling to mind the live comedy albums I loved (like Kinison’s LOUDER THAN HELL). After two live tours, I felt like we needed a home base of sorts, where we could experiment with a weekly live version of the show. I’m from Springsteen country, and Bruce had a home base at The Stone Pony. SModcastle is meant to be the Stone Pony of SModcast, I guess. We call the live show from SModcastle “SModcast 3D” – which would be a lie if we put it on the web, unless we included glasses. But when you’re there live, it’s LITERALLY SModcast in the third dimension. I guess that’s a long way to go for an unfunny joke that’s amusing to like two people – two people who’re willing to let lucrative web show money slip away, so they can make a joke about the state of the movie industry. We have no head for business, it would seem. 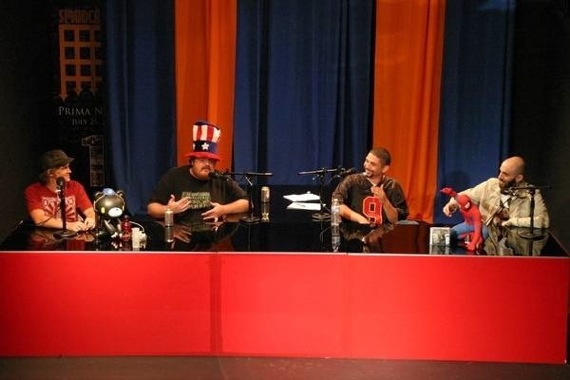 Tubefilter: How would you describe your audience for SModcast?

Smith: The audience is all over the place. On Twitter, I hear from lots of Mothers, who nurse/raise kids while listening. Truckers, cops, stoners, academics, old, young. I hear from college kids, naturally, but lots of high schoolers, too – a bunch of whom are just drawn to the DIY nature of podcasting, but hooked by how fun we make it look. And make no mistake: it IS fun. It’s the wild west on the internet still, so you’re more free there than any other medium of the moment. TV & movies are incredibly restrictive by comparison – in terms of not only freedom of speech, but also freedom of imagination. It’s theater of the mind, so we can “make” a far better “movie” on SModcast than we ever could in the real world. That draws a certain audience as well. But I couldn’t pinpoint one common attribute the audience shares – unless it’s a patience with listening to conversation they can’t join. That’d frustrate me, but the audience seems okay with it.

Tubefilter: Do you have a metric for success with the Smodcastle? Is it ticket sales to live show, or a more broader goal like eventually branding it as network of high-quality shows/podcasts?

Smith: Monetarily speaking? Naturally, with 50 seats, our aim is to sell out. But even then, the metric isn’t asses in seats: it’s selling tickets. We subscribe to the Blackout theory: you wanna hear the live shows for free online, just make sure they sell out. You don’t have to be there to sell it out. And those tix get donated to cats who can’t afford to go at that moment in time. And the idea (which has been working) is that when those cats CAN afford to buy their own tix, they spring for someone else at some point, as someone sprung for them. People from around the world buy tix for shows they’ll never be able to attend – out of respect and appreciation for the three years (and counting) of free shows we’ve produced. It’s like a hippie commune. It sucks that me & Mosier are married, because we could be getting all kinds of hippie free love.

But honestly, money was the last thought. As long as we can pay our rent and expenses from the shows, and all involved get to walk away with some cash for their time, we’re happy. You don’t open something like SModcastle looking to get rich; you do it because it’s just fucking fun.

So our success metric is pretty much “Is it still fun to do, not a hassle, and drawing a crowd?” If it’s yes to all three, yay: we’re successful. But it’s a good thing Mosier is half Canadian – that way, we’re able to decipher the success metric; as a student of American schools, I don’t know one ounce about the metric system.

Tubefilter: Can anyone make money directly from podcasting like this, or is it more about growing and cultivating a fan base that you can drive to follow you into other more lucrative parts of entertainment?

Smith: Sure – but thanks to my day job, that’s not the priority. Thanks to my day job, I don’t have to instantly monetize everything we do with SModcast. When the money comes, it comes buckets, son (and all over my tits) – but it’s only the byproduct of what we’re doing over there: enjoying the fuck out of ourselves, just talking. But don’t get me wrong: when people are willing to PAY you to talk to your friends, you should always say yes.