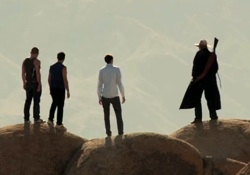 Ever since YouTube rolled out annotations two years ago, we’ve seen all kinds of games and even blatant attempts at gaming the in-video links.

But for Chad Villella, Matt Bettinelli-Olpin and Rob Polonsky—or ChadMattandRob as they are known to their YouTube faithful, they saw annotations as a whole new way to tell stories on the popular video platform. The trio whipped up a string of elaborate interactive comedy series starting with 2008’s breakout The Time Machine, which scored several million views across its web of “episodes.”

They followed it up with The Murder in 2009 and then this year’s The Birthday Party which bowed in January (see below). Now the trailer for their latest interactive quest—The Treasure Hunt—hit the internet today (above) expected to release sometime later this summer.

The project pairs the creators up with Fremantle Media’s Atomic Wedgie, as it is also being developed for television.

“We’ve been developing a way we could bring our Interactive Adventures to TV,” said Polonsky. “We’re really excited about the format. It’s really going to bridge the gap between the web and TV, where we’ll see the two mediums work together.”

No exact release date has been set for The Treasure Hunt, but Polonsky added that they are planning a live screening premiere at a movie theater in Los Angeles where the audience will be able to “choose their way through the story” through text messaging. At home viewers will also be able to tune in to a live stream of the premiere online and participate as well.