‘Childrens Hospital’ All Grown Up on Adult Swim 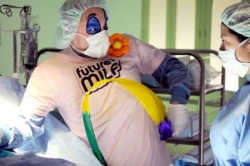 This was one of those web series no one quite knew how to spell correctly—was it Children’s Hospital or Childrens’ Hospital? Growing pains of grammatically ambiguous title. But thankfully, as the web series turned half-hour TV comedy bows on Cartoon Network’s Adult Swim this week, we no longer have to fret over that sliding apostrophe. Thank you David Wain, Rob Corddry and Jonathan Stern—the show’s three head writers and producers—for coming up with an convenient request from the hospital’s fictitious backer Arthur Childrens that it be, simply, Childrens Hospital.

While it isn’t the first web series to make the leap to television, it’s one of the first to do so without much meddling at all of the original internet version. In fact last night’s premiere on Adult Swim is really a re-run of the season that aired online on TheWB.com back in 2008. Showtime’s pickup of Lisa Kudrow’s Web Therapy also employed this stitch-together of the web version.

Two of the web episodes will air at a time, filling the 15-minute time slot that the show gets, until the second season debuts August 22. Even with the new episodes, it’s still just an 11 and-a-half minute TV show, after commercials, making it one of the shortest scripted live action shows on TV.

‘Why mess with what works,’ seems to be the philosophy for the creative team behind one of the web’s most star-studded comedies. It was almost a given that the show would make the move to TV, and its pickup in October by Adult Swim was a savvy move for a network that to date hasn’t had anything close to this kind of star power. Along with Corddry, the full web series cast return for the new season, including former Will and Grace star Megan Mullally, Boston Legal’s Lake Bell, Ken Marino, The Office’s Ed Helms, SNL’s Jason Sudeikis and Human Giant’s Rob Huebel. New additions include Malin Akerman, Henry Winkler, John Cho and Kurtwood Smith.

When it first bowed online, it was a no-holes-barred sketch-formed sitcom of racy absurdity, filled with sexual escapes of the hospital staffers, cancer jokes and plenty of blue humor. For the most part little had to be changed to retro fit the 5-minute web episodes for TV, save from a healthy amount of bleeping.

“It’s sort of the same tone,” said Corddry about the new season, “We get away with a lot on Adult Swim.”