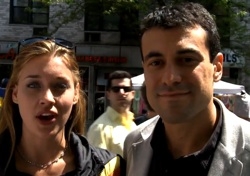 We first wrote about DiGiTS the week it launched last fall, amazed at the spectacle that was a real life Italian male model (Fabrizio Brienza) trying shamelessly to score phone numbers of New York City ladies. Sure, it was a little odd and perhaps a little creepy, but not surprisingly just what it takes to stand out in the sea of online video.

Now some 15 million YouTube views later, as DiGiTS gets its third season under way, the show has a new host, new look and even its own spinoff series. They have shed the slightly creepy middle-aged model for young German-British YouTuber Colleen Prietz (aka ThePickupChick).

Technically this is the show’s second host switch, trying out Lesley as a female version of a streetwalking pickup artist. At the time some fans balked at the replacement of cheesy Fabrizo, and the viewership numbers declined for the second season. But four episodes into the third season, the viewership numbers are trending even higher than the show’s original favorites.

For Driver Digital Media, the New York-based company behind the series, the idea was to broaden the show’s appeal to wider audience and ultimately build a network of web series.

“With the latest season of DiGiTS we listened to our audience and made the show more utility based,” said Zach Harris, Driver’s Director of Strategy and Distribution, when asked about the facelift on the series. “We wanted to transform DiGiTS into a do-it-yourself brand by actively engaging our audience with this new host.”

The first spinoff series is DiGiTS Declassified, a straightforward setup of attractive young ladies against a white backdrop sharing their unscripted pointers on how to pick up women. Already the show has racked up just over 1.1 million views on YouTube in a month since launching.

Another YouTube-centric series from the DiGiTS team is also slated to launch later this month called Offesnively Unoffensive, “a YouTube meta-commentary show,” according to Harris, with snarky commentartors commenting on the comments of YouTube users.