‘Sex and the Austen Girl’ Finds Original Twist, and Babelgum 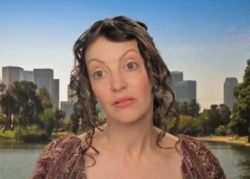 There’s a long standing debate over the presence of originality in derivative works—or, how much creative value does say, a spoof of an already über-popular Beyoncé-Lady Gaga video really have? The subsidiary version clearly borrows from the original, milking the internet zeitgeist for attention (and dollars) while never eclipsing its master. The flipside is of course the derivative that transcends the original, breaking both itself and the original into a new orbit of relevance—see: Numa Numa.

Somewhere in between those two poles lies a whole sea of creative output that could go either way. In web series, the title is usually the first giveaway. Sex and the Austen Girl launched today on Babelgum, a twenty-episode web series based on the best-selling Penguin novels, Confessions of a Jane Austen Addict, by Laurie Viera Rigler. Thankfully its name is misleading enough not to box this one into the humdrum glut of Sex and the City copycats.

Instead, it’s Jane Austen—not Candance Bushnell—that seeds the derivative nature of Rigler’s novels and now web series. Throw in a little time traveling body swap, with a sassy modern day Los Angeles 30-something Courtney Stone (Arabella Field) trading places with similar aged 19-century English lady Jane Mansfield (Fay Masterson), and you have a comedy to unfold. While shot economically on green screen, rather than opting for the pricey period film route, each episode is a fairly terse dialogue on love, dating and romance. The only thing these women seem to share is an unhealthy obsession with Jane Austen novels.

These are the same two characters from the novels, brought to life by the two capable actresses for an entertaining banter. To pull it off, the author teamed up her husband Thomas Rigler, who together with his producing partner Brian Gerber at Gerber Rigler, developed the series and as way to drive new audiences into the books. They got the backing from publishers Penguin Group and Bloomsbury Publishing for what marks the publishers’ first web series adaptation of one of their titles.

Babelgum picked up the series for an exclusive window of 45 days on each episode, with new ones bowing online every Monday for twenty weeks. Babelgum’s Comedy Channel publisher Amber J. Lawson commented on the deal, “As Babelgum Comedy continues to move forward with creating professionally-produced, brand-friendly and celebrity-driven content, it made complete sense to tap into the publishing world and provide a new business model for books that creates a completely new and different immersive experience.”

While Sex and the Austen Girl is also Babelgum’s first novel-turned web series, there have been a handful of such releases in the online video world to mixed success. Private seemed to hit a chord with its core teen audience for Alloy Entertainment, while Robin Cook’s Foreign Body series may have spent a bit much for its efforts.