The sadist is alive and well in web series drama. Maybe he wasn’t getting enough love on other screens—crowded out by brooding teen vamps? But online is where his dark games seem to run wild.

Compulsions went right for it, wasting no time in cutting to office drone Mark’s sadistic side. And the recently launched Dice had no problem with its merciless hero watching someone blow his head off in front of him. So with the premiere of Goon, the latest indie web drama to venture to the dark side, it feels like a trend is brewing.

Just two episodes in, this one is a mystery. Not in the traditional sense, more in the LOST sense where it’s not clear what exactly is going on yet or who we’re going to see. Even the show’s site is deliberately vague in its dishing of the synopsis and cast for the 18-episode drama. The only credited cast on the site so far is Ryan Schwartzman who plays Brian, our apparent protag. All we know is he has just killed someone—it was his first—and he’s trapped waiting for some sort of vengeance. That, and some unnamed British guy ties him up for a familiar interrogation and beat down. 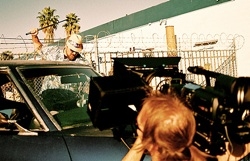 When I asked creator Marc Hampson what inspired him to set up camp on the internet, I was half expecting a nod to Fall of Kaden, Pink, or perhaps some early web drama lonelygirl15. Instead it was We Need Girlfriends, he says, that lured him into the web series waters.

“A few years back I got hooked on a show called We Need Girlfriends around the same time that I was already enamored with an online podcast series, Four-Eyed Monsters,” said Hampson. “I wanted to create some kind of series for the web and carried that idea, but my partners and I were really focused on making independent features.” And to be sure, Goon was indeed originally shot as an indie feature that he and his partners at Brotherhood Pictures made for the festival circuit.

“We decided we needed to go straight to the audience,” Hampson added. “I don’t know if we’ll make any money, but at least our work can be always be viewed now and not as a work-in-progress or teaser.”

Shot over 8 months in central and southern California with an “all volunteer cast and crew,” Goon epitomizes the clever, almost-no-budget filmmaking that colors much of the new breed of narrative web series. “Other than the DP dropping a grand on some portable Kino-Flo lights,” said Hampson, “we spent no money whatsoever and we were very happy with the end product.”

Re-cutting a feature for the web is getting more popular, though it’s not as simple a transition as it seems. Most films drag out their exposition and abide by the tight three-act structure that can make its episodic version uneven and awkward. “Once we began discussing doing a web series from scratch when we had the idea that this film which we had already poured so much work into was just sitting there and so we decided to imagine it in a series format,” added Hampson. “We’ve had to make some changes in post to both the story and the story-telling, but I feel like it breathes so much better this way.”

New episodes are released every week on GoonTheSeries.com and on their YouTube channel, with sixteen more to go to complete the season. Following the full online release, Hampson noted that they are planning a DVD release complete with a behind the scenes documentary, From Shelved to Series. Episode two is below: