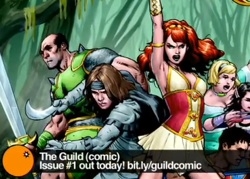 In honor of Felicia Day’s new comic prequel to The Guild coming out today, A Comicbook Orange interviewed the creator-star-and-now-comicbook-writer on today’s show. The series also hosted an (online) charity auction announced last week with ACO fan John Fillers bidding $101.99 for a signed copy of a Penny Arcade book with an original sketch. [A Comicbook Orange]

Jaleel White decided he really likes this whole web series game, and decided to follow up last year’s Road to the Altar with a new series he created and produced called Fake It Till You Make It which just wrapped shooting this week. White dishes on the labor of love that went into his indie production in a first-person day-by-day diary over on The Huffington Post today. [HuffPo]

IndieCon, a one-day conference focusing on new media production is going on tomorrow evening at the Universal Hilton. Speakers include Taryn Southern, Liz Miller, Illeana Douglas, Marti Resteghini and Thomas Hughes amongst others. Tubefilter is an official media partner of IndieCon and invites readers in LA to attend. [IndieCon]

Web TV network KoldCast just launched its spiffy new app on Boxee today, bringing its catalog of several dozen independent web series—almost all of them in 720p HD—to the open entertainment platform. With the “Boxee Box” coming out this summer, this will be another avenue for web series to make it into mainstream consumers living rooms. [Boxee Blog]

If you even kinda love Glee, you have to watch this online-only promo (below) for the new season of the hit FOX musical series which returns April 13 (two days after the Streamys). [New York Magazine]

Indie comedy series Poor Paul has apparently scored some major funding according to creator Sean Michael Beyer who announced today on Road to Success Radio that season 3 of Poor Paul is fully funded and will now be appearing exclusively on a yet-to-be-launched web site. [Road to Success Radio]