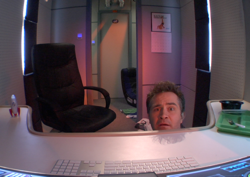 SOLO: The Series, an indie sci-fi web series from creator Jonathan Nail released its teaser trailer (above), expecting to premiere the series later this year. The show will center around a lonely man, Scott Drizhal, who is chosen to go on a solo, 3 year mission to Mars as part of a reality TV series. [SOLO: The Series]

IGN has launched a semi-animated new iPhone app review web series (below) from Portal A Interactive called iPWN this week—not to be confused with iPhun, Fast pasted, somewhat random but cruises through a slew of app reviews without hosts droning on about them.  [IGN]

Del Taco just launched a branded web series The Del Taco Super Special Show this week. The hosted sketch show is pretty commercial, straight out of their ad agency, but at least the taco brand wasn’t afraid to let host Wes work in a beaver joke in the opening bit. And like many of the fast food branded campaigns, there’s a call to action for fans to vote for their favorite clip from the first episode (below) and get a free Classic Taco at facebook.com/deltaco. [Grub Street LA]