Quick Clicks: 'If I Can Dream', 'Anyone But Me', Break's Leap, 'Beautiful Life' 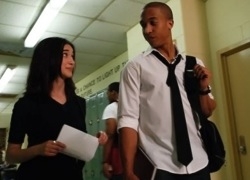 American Idol co-creator Simon Fuller is prepping a reality web/TV hybrid series with Hulu called If I Can Dream, which will follow three aspiring actors, a model and a musician trying to make it in Hollywood. Hulu will stream new episodes each week exclusively on its site when it launches in early 2010. MySpace, Pepsi and Clear Channel are also involved in the project. [THR, NewTeeVee]

Break Media, which owns popular video site Break.com along with a slew of other male-focused sites, announced a partnership with VOD platform Clearleap via the Clearleap’s Content Marketplace, making selected videos and web series available to cable and IPTV providers for their VOD offerings. [Break Media Blog]

Anyone But Me launched the much awaited second season to their web drama, with the help of promos from celebs Zachary Quinto, Liza Weil and Eric Stoltz. The season’s opening ep “The Real Thing” (below) see Vivian and friends dealing with a day of “unexpected encounters” in New York. [AnyoneButMeSeries.com]

Ashton Kutcher’s cancelled CW show The Beautiful Life: TBL has found new life online, as Katalyst has scored HP as a sponsor and released the rest of the season on YouTube. There were only five episodes done (and two aired) when it got the axe, but Katalyst plans to air all five. “What we feel like we’re doing is creating, in some ways, an industry first,” Kutcher told Reuters. “A show that couldn’t find its legs on television, we believe can find its legs on the Web.” [MTV.com]

The Legend of Neil, the gamer comedy web series from creator Sandeep Parikh and Atom.com, is making the web syndication rounds with Season 2 scoring a front page skin on Dailymotion this week as part of their Zelda movie Hero of Time promotion. [Dailymotion]