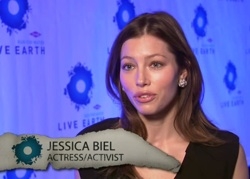 Global environmental outfit Live Earth hit the scene with a bang back in summer of 2007—07/07/07 to be exact—with a worldwide live concert event with more than 150 musical acts in 7 continents. Kanye West, Kelly Clarkson, Black Eyed Peas and Jack Johnson all headlined the event that drew awareness for the world’s emerging Climate crisis. Now Live Earth is prepping their latest global event—Run for Water with lead sponsor Dow—taking aim on the worldwide water crisis an international (think 192 countries!) series of 6km run/walks (the average distance women and children walk everyday to secure water) with local concerts and water education events on April 18, 2010.

To build awareness for the April event, they launched LiveEarth TV today, a hosted web series acting as a hub for all of the celeb-laden build up. Jessica Biel, Pete Wentz, Alexandra Cousteau, Angelique Kidjo and Jenny Fletcher are all attached and took part in the kickoff event in episode 1 (above). We’re not sure how they managed to snag internet citizen-journo Shira Lazar away from her insanely booked schedule, but they did. Lazar aims to be a informed voice for the millennial set and this fits right in line.

Live Earth’s Interactive Director Andy Sternberg said they plan to produce 8 to 10 episodes of the series leading up to April. The opening episode gets its share of one-on-ones with the celeb activists, but also ends up dishing some gripping facts about that state of water these days:

“1 in 8 people don’t have access to safe, clean drinking water. That leads to 1.8 million deaths each year, mostly in children under 5.”

There are also a number of calls to action, like finding a local Run for Water event, signing a global petition and of course subscribing to the series on its YouTube channel.