5-On: 5 Aliens on Life without the Sopranos 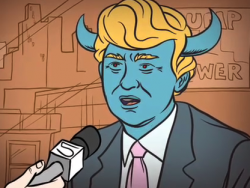 Remember 5-On? Devin Clark’s animated alien and robot obsessed news show on Atom? Well it was a year ago this week that news of Comedy Central ordering up Clark’s Ugly Americans for a pilot. Now the pilot turned into pickup with the series set for a March 2010 debut on the cable network and a sneak peek (below) via the Atom blog shows hints of the monsters-living in a modern world.

As a web series, the 8-episode 5-On (above) debuted back in June of 2007 with an intrepid reporter, Alan Whiter, interviewing “five of anything about everything”—five aliens, five robots, five monsters. Comedic writers Nick Kroll (Cavemen) and John Mulaney wrote and voiced the series along with Clark.

Ugly Americans is another example of Comedy Central tapping its web comedy arm, Atom, as a form of development pipeline. Already it showcases the best of the online comedy site weekly on air via its AtomTV block, but more recently it seems to be ordering full series based on web originals like Secret Girlfriend and Michael and Michael.