'Buffy' Web Series To Be Whedon's Next Move? 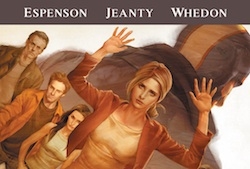 With news last week that Joss Whedon’s Dollhouse officially got the cancellation axe from FOX, there’s all kinds of speculation about what’s next for the captain of the Whedonverse. There’s still talk about Whedon’s digital studio plan, which would include a second season of his web musical Dr. Horrible’s Sing-Along Blog.

But first up might be something else, especially with Whedon’s The Cabin in the Woods film pushed to 2011. Sci-Fi Wire spotted a casting breakdown for a new Buffy the Vampire Slayer web series in the works. Jane Espenson recently talked to A Comicbook Orange about her writing work on the Buffy Season 8 comic book series, which could come into play in this new project.

Based on the breakdown, the series will be based on the comics and feature the characters Twilight, the Big Bad of Season Eight, and evil British socialite Slayer Lady Genevieve Savidge, who plots to usurp Buffy’s place in the Slayer hierarchy. (Sci-Fi Wire)