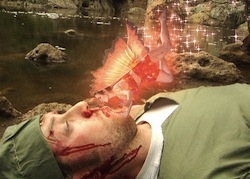 Lots of chatter this week about live web series, but who says scripted series can’t have a little live streaming fun too? The Legend of Neil dropped its season 2 finale (above) yesterday and followed it up with a live chat last night on UStream with the cast that drew over 10,000 total viewers. First watch the episode to see if the show’s involuntary protagonist Neil/Link (Tony Janning) will ever get princess Zelda (Angie Hill) out of the hands of the evil Lord Gannon and his lackey Wizrobe.

Legend of Neil is clearly the online network’s biggest original series hit so far—check out the tagline under the Atom.com logo (right). The Comedy Central owned site is doing their part to market the series, at least in an online fashion, with a series of posts on the site giving fans some behind-the-scenes action like a two–part director’s commentary. An excerpt from Parikh, who also stars as Zaboo on The Guild, adds some color to the remarkably raunchy musical episode (below) starring Felicia Day as the Fairy.

“So, the Fairy song, yes it’s raunchy as all hell, and yes, Felicia was a bit nervous about rolling with the lyrics. At the same time, I knew (and secretly deep down I believe she knew) that once she got rolling with it she would just own it. She’s got a potty mouth when improvising, which is how I knew her originally and why I always wanted her to play the fairy. Such dirty words from such a sweet girl, how can that not be funny? Answer: it can’t”

The idea of a cast/crew live streaming chat isn’t exactly new, and a number of series like Tiki Bar TV and The Guild have made us of going live to take fan questions in real time. There was even the finale of San Francisco-based EXIT Stage Left which actually shot its finale, a full scripted episode, live back in June.