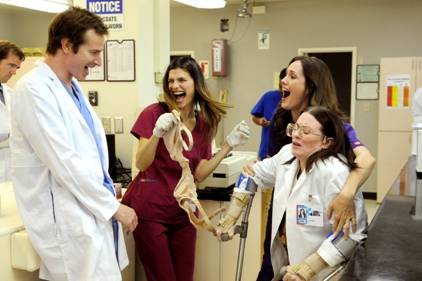 The series was nominated for a multiple Streamy Awards back in March, including Best Comedy Web Series, Best Female Actor in a web series for Megan Mullally and Corddry for Best Male Actor.

After talks reportedly broke down between Warner Brothers and Comedy Central, Adult Swim, which shares channel space with Cartoon Network, made an offer to pick up the absurd comedy for the spring season. The 12-14 minute length of Childrens’ Hospital eps should make a natural fit into Turner-owned Adult Swim’s 11-15 minute programming blocks.

Rob Corddry produced the series along with friends David Wain (star and creator of Wainy Days) and Jonathan Stern (producer of Horrible People, and Wainy Days).