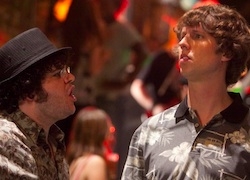 Sony announced today that it’s fall tentpole web series, Woke Up Dead, is off to a formidable start racking up 1.4 million streams in just 10 days since its premiere on October 5. 1.4 million for an original web series isn’t shabby no matter how you slice it. This show clearly has two big factors pushing it along: Zombies and a recognizable, talent-rich cast.

For those that haven’t yet checked it out, it’s not too late to bang through the first dozen episodes which clock in at a little over four minutes a piece. Jon Heder stars as recent USC grad Drex Greene who lives with his Zi8-sporting video obsessed roomie Matt (Josh Gad) and one day wakes up to find out he’s dead. Drex naturally is a little confused and tries to reclaim some form of normalcy. That means taking a droll office job a InfoCorps, where his snooty co-worker Andrew (Wayne Knight). Yes, there’s a love interest, Cassi (Krysten Ritter), a young med student who tries to help figure out what his brain-eating zombie condition is all about.

So far twelve episodes of the Kodak-sponsored series have been released, counting today’s new one. Assuming that the first one was the top performer, as is usually the case with new web series, we’ll estimate it at around 300,000 views. That leaves about 100,000 as an average per episode for the following 11.

Their biggest previous hit to date was Angel of Death, which notched just over 5 million views before it was pulled down to drive sales of the DVD. Coming in second, Star-ving, the David Fasutino faux-reality series racked up a decent 3 million total streams on site.

For more about the series, including an interview with Executive Producer Stan Rogow of Electric Farm Entertainment, check out our Woke Up Dead launch feature. Electric Farm’s other recently launched web series, Valemont, is off to a strong start as well on MTV according to EFE’s Brent Friedman.